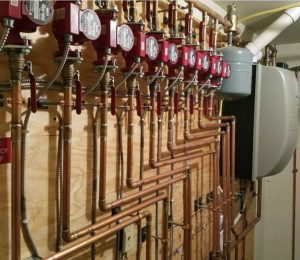 Installation of the boilers provides more consistent heat for residents of the apartment complex.

Situated on four acres in a wooded area, the Diamondhead Apartment complex consists of four buildings, each with eight apartments. Its deteriorating heating system was installed when the complex was built in 1989.

“Residents of the building were contacting us about cool conditions or uneven heat from room to room,” says Anne Young, area director for PK Housing & Management, the firm that manages the complex. “We were servicing the boilers at least three to four times every winter to maintain the proper heating conditions, but it was becoming difficult to keep up.”

Young turned to Mark Spencer, president and owner of Universal Plumbing based in Kingsford, for a solution.

“Upon inspection, circulating pumps and zone valves were failing, temperature control was limited, and the boilers were old,” says Spencer.

According to Spencer, the aging units were piped as a hot loop system on outdoor reset and would run continuously to maintain 180-degree water temperatures 24 hours per day.

“The units only shut off during the summer months when temperatures reached 75 degrees or higher,” says Spencer. “It was time to replace the boilers with a more efficient system that would have the added benefit of reducing fuel expenses.”

The installation of the Weil-McLain Eco units required complete re-piping and removal of the old boiler systems. Instead of connecting the new units as zone valves, Spencer configured the units with a pump design.

Spencer installed one Eco unit in each building with every unit configured with its own thermostats and pumps for each apartment and common area.

The Eco units also were set up to run on modulation with outdoor reset.

The units were installed one at a time during milder weather conditions, and Universal Plumbing provided space heaters for tenants, as needed.

Diamondhead has realized several benefits from the installation of its Weil-McLain boilers. For one, ongoing boiler maintenance is no longer required, just annual servicing of the units.

“With all four boilers installed, we haven’t had any maintenance issues and no loss of heat thus far,” says Young.
Young also appreciates the smaller footprint of the Eco units. “I was surprised at the size of the boilers compared to the older systems that took up a lot of space,” says Young.

A benefit of the Weil-McLain boiler installation was the energy savings realized. Fuel costs for the complex have been reduced by more than 40 percent from just two years earlier, providing savings for the building’s owner.

But, most important, tenants are happy.

“We have more consistent heat and more comfortable conditions for residents,” says Young. “All around, it’s a wonderful system.”

Young is so pleased with the results she had two additional Weil-McLain boilers installed in another nearby apartment building, and plans to install Weil-McLain units in other buildings too.