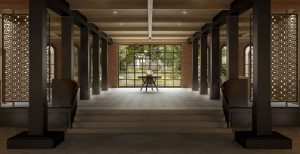 Walking into the magnificent new interior spaces of the old bookbindery, is like traveling over a century in a matter of footsteps.

The Manhattan neighborhood of Tribeca is a place where urban grit and metropolitan glamour merge. In recent years, its brick-and-cobblestone allure has come to rival the posh precincts of midtown for the best opportunities in city living—and the most sought-after apartments and condominiums.

This helps explain why the raw loft spaces of a 260,000-square-foot former bookbindery built in the 1880s attracted developer Nathan Berman, managing principal of nearby Metro Loft Management LLC, to reimagine the classic half-block building at 443 Greenwich as 53 contemporary urban condominiums. “This was really the last and also the largest work of original Tribeca architecture in this highly desirable area,” says Berman, whose company is best known for market-leading multifamily conversions of office towers around Wall Street. “We saw a way to reinvent the building that would preserve its landmark character while also allowing an unusually high degree of privacy, a modern sensibility and all the key amenities expected of top-end condominiums.”

Originally designed by Charles Coolidge Haight, the red brick, bluestone and iron exterior stands practically untouched. To cross into its magnificent new interior spaces, however, is to travel over a century in a matter of footsteps.

With a mix of market savvy, design vision and craftsmanship, the team remastered Haight’s original work, restoring the historic brick façades and courtyard walls while opening up large interior spaces. The 7-story building was originally constructed of load-bearing masonry perimeter walls with heavy timber columns and girders framing wood-beamed floors. “All these were restored, giving the interiors an authentic architectonic sense of space and order,” says John Cetra, AIA, CetraRuddy’s founding principal. “In the adaptation, many structural elements remain exposed, forming a historic organizing element within the common spaces and apartments.” The residences of modern materials and various patinated metals highlight the raw, elemental character of the monumental beams and columns, allowing residents to appreciate the history and authenticity of this Tribeca original, Cetra adds.

At the existing roof level, the project team added contextually sensitive penthouse extensions for duplex and triplex residences. The result is an optimized mix of 53 residences, including eight penthouses and units ranging from 2,000 to 9,500 square feet and from two to five bedrooms, with the largest units boasting six and a half baths. 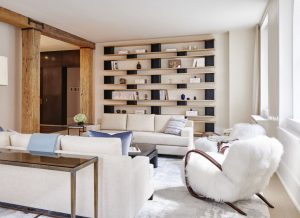 Modern materials and various patinated metals highlight the raw character of the beams and columns, allowing residents to appreciate the history of this Tribeca original.

To complement the landmark’s classic proportions and silhouettes, CetraRuddy’s Founding Principal Nancy Ruddy, along with Ximena Rodriquez, principal and director of interior design, devised a palette of contemporary textures, modern craftsmanship and luxury-level finishes. They hand-selected marble and schist for the kitchens and baths alongside custom acid-etched glass, 8-inch-wide oak plank floors, and accents of antiqued bronze and polished stainless steel. Repurposed original details alluding to the building’s former industrial life are adapted to contemporary living. Their kitchen designs are fabricated by Christopher Peacock, a renowned cabinetmaker whose work is better known in custom single-family residences than in large-scale multifamily works.

Throughout the homes, natural light is maximized through large arched windows and doubleheight spaces, subtly cuing the transition from street-facing living areas to more private bedrooms overlooking a central garden courtyard. Originally designed to illuminate and cross-ventilate factory floors, the courtyard connected to side streets via narrow driveways once used for loading and access. Today, the courtyard offers a lushly landscaped respite, and its driveways lead to an elegant underground parking lobby with Guastavino tile arches, accessed through a historic iron gate. Additional building amenities include a luxe fitness center with children’s playroom, a hammam with locker rooms and a 75-foot lap pool lined in travertine marble walls. At ground level, a 24-hour lobby presents a sculptural ceiling design and views of the interior garden.

The ambitious retrofit will be substantially complete this winter, and the first residents started moving in last summer. “This has been a complex building project in terms of its purely technical challenges,” Berman says. “But it is also a gift to us, to the buyers and to the city. 443 Greenwich is almost literally a cornerstone for Tribeca, a significant and sizeable landmark that contributes to the living history of this amazing city neighborhood.”

Local real-estate brokers and shelter media are calling 443 Greenwich “TriBeCa’s most private address” and “a new enclave for A-list property buyers” in entertainment, finance, sports and high-tech. “The building’s historic character sets a backdrop for true creativity in modern city living,” says Richard Cantor of New York’s Cantor-Pecorella, a leader in residential real-estate concepts, marketing and sales engaged by Berman to work on the project. Outside, 443 Greenwich is a purely contextual gem, complementing Tribeca’s heart and soul.

C.C. Sullivan is a writer about buildings, architecture, and the design and construction industries. He is founder of the content and marketing agency C.C. Sullivan, Montclair, N.J., which focuses on communications for the AEC industry.