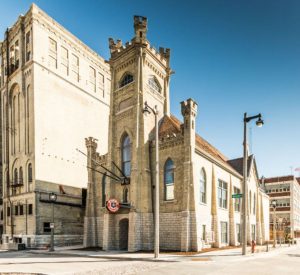 For more than a century, the city of Milwaukee has been known as the beer capital of the world. An early immigrant to Milwaukee, Frederick Pabst, started one of the country’s first macro breweries.

For more than a century, the city of Milwaukee has been known as the beer capital of the world. The city was incorporated in 1846 and by 1880 nearly a third of Milwaukee’s population was made up of German immigrants. From their homeland, the Germans brought beer halls and a culture of brewing beer.

One of those early immigrants to Milwaukee was a man named Frederick Pabst, who established his eponymous brewery in 1866. His beer became famous and won a Blue Ribbon at the Columbian Exhibition World’s Fair in 1893. The Pabst brand has bragged about that award ever since.

The Pabst Brewing Co. has long been an important part of the city’s DNA. Pabst was one of the country’s first macro breweries, and its impact can still be felt all around the country today. Whether from faded bar signs hearkening back to the company’s heyday or present-day hipsters sipping on a bottle of PBR at an alt-rock show, Pabst remains in the national consciousness.

As times and America’s beer tastes changed, much of the once sprawling 21-acre Pabst Brewing campus started falling out of use in the mid-1990s and sat vacant for years. Recent efforts have revitalized the Pabst complex into a hip, uniquely Milwaukee neighborhood, known simply as The Brewery. The district includes new and historic buildings that feature apartments, a hotel, two new breweries, restaurants and taverns. There are parks on the campus, as well.

A relatively recent renovation to join the Brewery complex is known as Building 23. The converted church features a beer hall and restaurant on the second floor, where the sanctuary once was, and a small batch brewery on the first floor. An outdoor beer garden in the rear provides additional customer seating when the weather permits.

The building was originally constructed in 1873, not as part of any brewing operation, but as the First German Methodist Episcopal Church. The Pabst Brewing Co. took over the building in 1898 and it was transformed into a restaurant, beer hall and concert venue called the Forst Keller restaurant. It was home to many of Milwaukee’s prevalent German societies.

As part of Pabst’s manufacturing complex, the space was designated Building 23 and it was often used for company events, meetings and training. The number 23 can still be seen painted above the door at the main tower entrance and remains part of the building’s identity. Forst Keller was closed in 1971, but Pabst continued to use the building sporadically at least through the late 1990s.