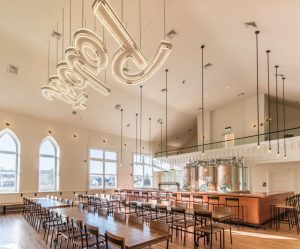 With the desire to bring Pabst Brewing back to Wisconsin, custom brewery equipment is installed after the restoration of the ground-floor space completed.

In addition to fitting into the historic fabric of the neighborhood, the Building 23 retrofit was also designed to work in harmony with the natural environment as much as possible. Sustainability was a point of emphasis throughout.

“The project is in a LEED neighborhood, so conservation contributed to the design without compromising the historical-preservation process,” Ernst says. “While stormwater-conservation methods were already in place, the addition uses modern elements for thermal performance. Interior storm windows were applied to the historically restored wood windows, and LED lighting was exclusively used in the building’s lighting design.”

Smart design and new technology enabled the project team to bring energy efficiency and the benefits of modern building operations to the facility.

“Balance is always top of mind on projects like these,” Raiten says. “Discovering the second-floor framing was a timber structure with a masonry veneer allowed us to add insulation in the exterior walls. Most of the equipment for a modern facility is housed in the new addition. This includes the elevator, HVAC equipment and a fully equipped kitchen.”

Cream of the City

Bringing a 19th century building into the 20th century, of course, required several other upgrades and touchups. For example, the chimneys were found to be leaning toward the building and needed to be stabilized with rebar and concrete to prevent further movement. And a piece of the brewery’s history is present in the outdoor beer garden, which incorporates reclaimed iron gates from the original facility in its design.

Like other buildings in The Brewery, Building 23 stands as a monument to the history and cultural fabric of Milwaukee. Beer, and specifically Pabst beer, is a big part of that heritage.

“With the desire to bring Pabst Brewing back to Wisconsin, custom brewery equipment was designed to be installed after the historic restoration of the ground-floor space was completed,” Ernst says. “Enjoying a Pabst in the outdoor beer garden is a truly Milwaukee experience.”

The renovated facility opened to the public in April 2017. Residents and visitors to the city alike have been drawn to this vibrant, historic neighborhood, and the revitalized Building 23 has been a success. It won the HPC’s Cream of the City Award for Historic Renovation in 2017.

“The overall reaction to this project has been overwhelmingly positive,” Ernst says. “The mayor and city aldermen have been very pleased with the outcome.”

Register for Free IEQ and Energy Efficiency Webcast from ASHRAE