Recently in Atlanta, Skanska USA’s Chief Sustainability Officer Beth Heider will be elevated to Fellow of the American Institute of Architects. The fellowship program honors those architects who have made a significant contribution to architecture and society and who have achieved a standard of excellence in the profession. Out of a total AIA membership of more than 85,000, there are only roughly 3,200 members distinguished with this honor. Here, Heider reflects on her career as an advocate for sustainability.

When I was in architecture school in the ‘70s, the concept of green buildings was still in its infancy, green buildings looked like the architectural equivalent of a Birkenstock sandal and specifying vinyl asbestos tile was common practice. How many ways is that bad? But we did not know, we just didn’t know. 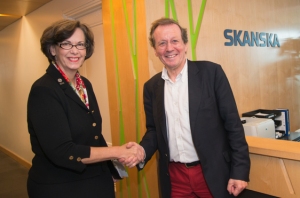 Before I joined Skanska, I was a consultant to the U.S. General Services Administration. This was back in 1996, when the GSA had the foresight to wrestle with the question of, “What should the cost commitment be to ‘green’ the federal workplace?” I helped design the methodology to put a price tag on that commitment several years before LEED. This study for GSA connected me to a group of green building thought leaders, many of whom remain collaborators and friends. So my entre to green building came through cost analysis—making the business case for green building. Based on this work, the federal government increased budgets for capital projects which impacted billions of dollars in federal work and supported the GSA’s commitment to green the federal workplace. Thankfully, today that cost premium for most green building has all but disappeared.

Since joining Skanska, I’ve collaborated—most notably with my preconstruction colleague Steve Clem—on more than a dozen studies exploring the cost and benefits of building more sustainable buildings. This research, supported by the success of real projects, continuously reinforces my belief that building more sustainably means building better. The most elegant solutions come when the entire project team collaborates, when the initial and life-cycle costs of projects are in balance, and when we dare to look at the potential of new materials, new systems and new strategies that question commonly-held beliefs.

As an industry, we have come a long way in terms of connecting the dots between the bottom line and the impact of sustainability, but we can—and must—continue to do better. Just this past year, Skanska partnered with the World Green Building Council on a major global research effort to establish common ways of measuring health and productivity benefits arising from green buildings and to provide best practice guidance on the types of green building features that enhance them. We found that a range of factors—from air quality and lighting, to views of nature and interior layout—can affect the health, satisfaction and job performance of office workers, and in turn, the bottom line of a business. It’s this kind of quantitative advocacy that has changed the conversation about not only what, but the way, we build. 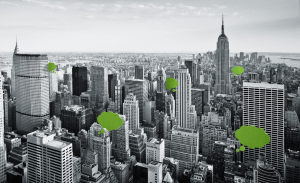 Heider led the push for Skanska to pursue LEED Platinum certification at our offices in the Empire State Building, demonstrating that green retrofits can both save money and reduce a space’s environmental impact.

In 2008, Skanska decided to refurbish our flagship offices in the Empire State Building to LEED Platinum. We wanted to show that environmentally responsible and energy efficient renovation is possible even in a historic skyscraper. Our 32nd-floor office is the first in the Empire State Building to obtain LEED Platinum certification. Skanska now benefits from a 58 percent reduction in electricity costs compared to our prior office, and we are on track to save over half a million dollars in operational costs over the life of our lease. We also tracked sick leave as an indicator of health and workplace productivity. In our first two years of occupancy, our sick leave dropped between 15 percent and 18 percent over our previous offices. This was by design.

Learning from Other Green Leaders

One of the highlights of my career was serving as the chair of the Board of Directors of the U.S. Green Building Council. Two great chairwomen preceded me: Gail Vittori and Rebecca Flora, each with different skillsets. This was also the first time in my entire 30-plus-year career I worked with female leaders. Collaborating with the amazing and talented USGBC staff on a variety of committees and work groups during that first term I learned the power of USGBC’s engine and I saw that strength multiply under CEO Rick Fedrizzi and COO Mahesh Ramanujam. That preparation and collaboration emboldened me to lead according to my own compass.

Today, as chief sustainability officer, my job is to translate into action Skanska’s commitment to sustainability and constantly seek out pragmatic and useful ways to impact and measure the triple bottom line.

In talking about sustainability, it’s not just thinking about better buildings but how we build those buildings that matters. I was drawn to Skanska because of the company’s commitments to ethics, and because Skanska provided an opportunity to take the important green work I had done with the federal government into the field. This emphasis on ethics expanded to embrace the concept of the triple bottom line: maximizing positive effects on humans, the planet and the economy.

What’s the future look like? It is projects like the Bertschi School Science Classroom and the Brock Environmental Center that not only look to achieve net-zero energy or water but also serve as a model for living responsibly with nature and each other. 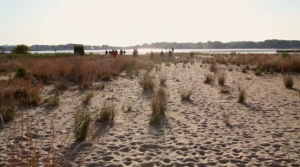 The biggest challenge in my career as a green advocate has been confronting honestly held but incompletely informed beliefs and complacency. What a shame it would be if we saved billions of dollars in energy costs and health care costs and enhanced productivity, only to find out that human activity had less of an impact on global climate change than we had thought! Regardless of your position on climate change, enhancing energy and water efficiency and enhancing human wellness and productivity through better buildings represent one of the greatest economic opportunities of our lifetime. And if you believe the vast majority of the scientific community, we need to get busy and embrace this opportunity now. If climate change and unhealthy materials were perceived to be as much of a threat to humanity as World War II, I believe that we would find a way to address the threat and create economic prosperity. Population projections alone are reason enough to encourage conservation. If we are going to ensure that our planet can support a burgeoning population, sustainability must be our priority.

Elizabeth Heider is the Chief Sustainability Officer at Skanska USA.