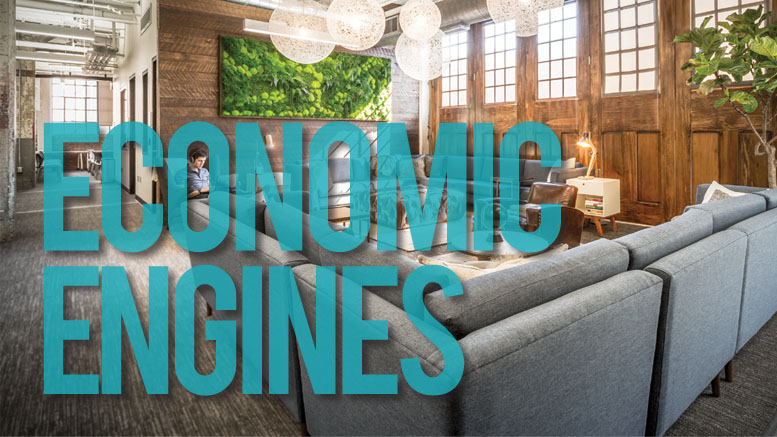 Today, about 38 different industries are represented within 36°N, including food and service companies, brick and mortar stores, energy companies and consultants.

Downtown Tulsa, Okla., could be described as a ghost town after the oil bust of the 1980s. [See “Back from the Dead”, March-April 2014 issue, page 22, for more background on the city’s boom to bust.] However, artists—who tend to see possibilities where others don’t—continued to make their homes and open their galleries in Tulsa’s downtown Brady Arts District. Located between the Inner Dispersal Loop, a vital highway surrounding downtown Tulsa, and the Santa Fe Railway, the Brady Arts District was established when the Brady Theater opened its doors in 1914, followed by Cain’s Ballroom in the 1920s. (Both venues still host concerts today.) In addition to these concert venues, galleries and artsy shops, some industrial businesses and a few bars and restaurants made a go of it in the district. The rest of the Brady Arts District could, at best, be defined as worn down.

Recognizing a healthy downtown is fundamental to a city and its suburbs, Tulsa leaders created Vision 2025 in 2003. The one-penny, 13-year increase in the Tulsa County Sales Tax funds economic development and capital improvements. As of April 2016, total sales tax receipts exceeded $683 million. (In April 2016, Tulsa County citizens voted to extend the Vision program for another 13 years.) By partnering with visionaries from the private sector, the Brady Arts District, especially, has experienced exponential growth.

Billionaire philanthropist George Kaiser is one of the visionaries who has expanded development through the George Kaiser Family Foundation while keeping the Brady Arts District’s fundamental character in place. Among the foundation’s notable projects is the Universal Ford Building, which was originally constructed in 1917 as a Model T dealership. Having worked with the George Kaiser Family Foundation on projects in the district for nine years, Chris Lilly, principal of Lilly Architects, Tulsa, was chosen to be the architect for the Universal Ford Building’s rehabilitation. There are 48 desks and seven offices within the space.

The building sits on one of the last intact tracts of historic Main Street in downtown Tulsa. As such, the George Kaiser Family Foundation was focused on developing it in a way that made sense for the up-and-coming community. Lilly notes the foundation’s original intent was to turn the Universal Ford Building into multifamily units to continue introducing a mix of residential and commercial spaces to the neighborhood. But as the project moved forward, a new idea emerged for an entrepreneurial hub called 36 Degrees North, or 36°N.

In 2015, WalletHub, a website that describes itself as an “artificially intelligent financial advisor designed to leave your wallet full”, named Tulsa the ninth best city in the U.S. to start a business, based on data from the U.S. Census, Bureau of Labor Statistics, National Venture Capital Association and more. This isn’t the first time Tulsa has been recognized as an entrepreneurial hotbed. In fact, the city has a number of programs and groups supporting the entrepreneurial spirit, including The Forge, a startup incubator established by the Tulsa Young Professionals group and run by the Tulsa Regional Chamber; Kitchen66, an incubator for those interested in the food industry; and the Tulsa Startup Series, a bimonthly pitch competition and annual demo day led by Tulsa Community College and the Lobeck Taylor Family Foundation. However, a lot of entrepreneurs didn’t know about the re- sources available to them; therefore, it only seemed natural to create a basecamp for Tulsa’s entrepreneurs to gather, learn and motivate one another. 36°N is that place.

Shanese Slaton, 36°N operations manager, says the name 36°N is the literal destination of the physical space that was created within the Universal Ford Building; it’s the latitude line that runs through Tulsa. Today, about 38 different industries are represented within 36°N, including food and service companies, brick and mortar stores, energy companies and consultants. There
are 48 desks and seven offices within the space. These are almost full and have a waiting list. In addition, 36°N offers a co-working membership, which allows people to come in and co-work anywhere within the space, including in a living room, lounge area, and at tables and chairs spread out in other rooms. “Everything here is on a month-to-month basis so there’s a low cost of entry if you’re starting your own business and you don’t want to worry about a six-month or year-long commitment,” Slaton says. “That also means you never know when a desk might come available.” 36°N offers a co-working membership, which allows people to come in and co-work anywhere within the space, including in a living room, lounge area, and at tables and chairs spread out in other rooms.

36°N also hosts events and workshops geared toward helping businesses grow. The events are sponsored by non-profits, universities and other partner groups. (View a calendar of events.) “We just finished hosting 200 OK, which is one of the largest tech conferences in Oklahoma,” Slaton adds. “We had more than 100 people in the space just for the conference. They brought in technology speakers, talking about coding and what is coming up in the industry. We enjoyed that and look forward to hosting more conferences like it.”

Slaton says the beauty of 36°N is the networking and peer groups that have been created within its walls. “I think this is a great place to meet like-minded people who are here to grow and work and operate their businesses more efficiently,” she says. “You often find these synergies of someone saying,‘This is what I just went through and this is how I handled it’ and another saying, ‘I just went through that and this is what I did’. We’re not an incubator but we want to expedite the process for companies to grow, whether that means to grow and fail and then pivot and try again or to grow faster than they would have without us.”

Be the first to comment on "A Tulsa, Okla., Building, Once a Model T Dealership, Is Transformed into a Co-Working Space"