Burlington, Vt.—population approximately 42,000—is a forward-thinking city, known as the birthplace of Ben & Jerry’s ice cream and named in 2010 by Forbes magazine as one of America’s “prettiest” towns. Recently, the city has added another, even more impressive, accomplishment to its résumé: Burlington is operating on 100 percent renewable energy—and not just within municipal buildings, but within residential, commercial and industrial buildings, as well. 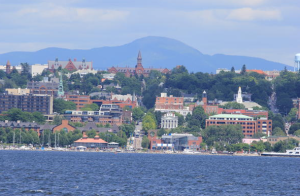 One-third of Burlington’s power comes from a mix of wind contracts with Maine and Vermont vendors and solar.

The feat has been a decade in the making, according to Neale F. Lunderville, Burlington Electric Department’s general manager. The city’s five-person electric commission, which consists of Burlington citizens who are appointed by the city council, decided around 2004 it wanted to take the electric department’s already advanced renewable portfolio further. “We had already been doing a pretty good job with our biomass and other things that have been around for a while,” Lunderville says. “We made it a point to buy renewable contracts and source more renewable power. The last piece of the puzzle was purchasing Winooski One, the first dam located on the Winooski River outlet into Lake Champlain, for hydropower.”

Burlington officially began operating on 100 percent renewable energy in September 2014 when it purchased the Winooski One hydro dam, which brought 7.4 megawatts of power into its electric system. The dam provides about 8 percent of Burlington’s electric needs. This, along with other hydroelectric power purchased under contract, provides about one-third of the city’s electricity. Another third of the city’s power comes from a 50MW biomass plant, which is located in Burlington and 50 percent owned by Burlington Electric; other Vermont utilities own the other half, allowing those utilities to claim the power. The final third comes from a mix of wind contracts with Maine and Vermont vendors and solar, which includes Burlington Electric’s own solar farm that produces 1/2MW of power, as well as several smaller solar installations.

“We wanted a mix of different renewable sources, so finding the right mix and finding it in New England, which is a fairly confined space, was difficult,” Lunderville explains.

Once contracts were negotiated by Burlington Electric’s power purchasers, the contracts were approved by the commission—not all were approved by voters. However, voters did approve a long-term contract for hydroelectric power from Hydro-Quebec and were asked to approve a $12 million bond to finance the purchase of Winooski One, which they did overwhelmingly in March 2014. “That’s a great example of where the community came in and said we support Burlington Electric going to 100 percent renewables and we’re willing to put our money where our mouth is,” Lunderville asserts. “It passed with 80 percent of the vote; it was big.” 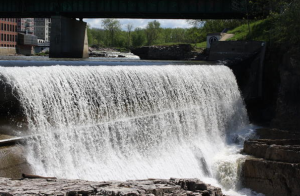 Burlington officially began operating on 100 percent renewable energy in September 2014 when it purchased the Winooski One hydro dam, which is the first dam located on the Winooski River outlet into Lake Champlain.

Lunderville adds Burlington Electric’s customer base is very “plugged in” to energy issues. “We had strong community support to be on the leading edge of innovative ways to manage our power and work toward our climate-change goals.” (Learn about Burlington’s Climate Action Plan.)

Consequently, Burlington Electric has rewarded its customers by not raising rates since 2009 and, Lunderville adds, the utility has no plans for a rate increase for at least the next two years. Lunderville credits this to the utility’s revenue stream created by its renewable-energy portfolio (selling renewable-energy credits) and its newfound protection against fossil-fuel pricing volatility. “We’re not worried about the cost of fossil fuels,” he says. “Oil could easily go up to $300 per barrel; natural gas could go to $15 per Btu. It wouldn’t matter to us.”

Granted, Burlington Electric’s renewable portfolio is not free. It buys the wood that is burned at the biomass plant, and fuel from the sun, wind and river are purchased through Power Purchase Agreements, which allows Burlington Electric to pay a fixed price per MWh. “We’ve been very cost-conscious here, so even when the cost of renewables was a bit higher than fossil fuels, we’ve been able to manage it on the backend by keeping our costs low,” Lunderville adds.

Before sourcing 100 percent renewables to operate Burlington, the electric department had been buying “market power”, a mix of 50 percent natural gas; 30 percent nuclear; part coal and oil; and a small amount of other fuels, such as hydro, biomass, landfill gas, etc. Market power is available in New England, which is its own independent system operator.

Although the city has moved away from market power, critics still find faults with Burlington Electric’s forms of power generation. Lunderville explains: “Some people don’t like wind turbines on ridge lines; other folks don’t like hydro because it upsets the flow of the river and fish passage; some folks don’t like biomass because they don’t believe we should be cutting down trees; some people don’t like solar farms because we shouldn’t be taking up green spaces. However, these are all better alternatives to buying power from natural gas- or coal-fired facilities. We have yet to invent the perfect energy source. We would love to have impact-free electricity generation but it doesn’t exist. Instead, we’re going to continue to push toward finding ways that have the least impact.”

Be the first to comment on "Burlington, Vt., Operates on 100 Percent Renewable Energy"