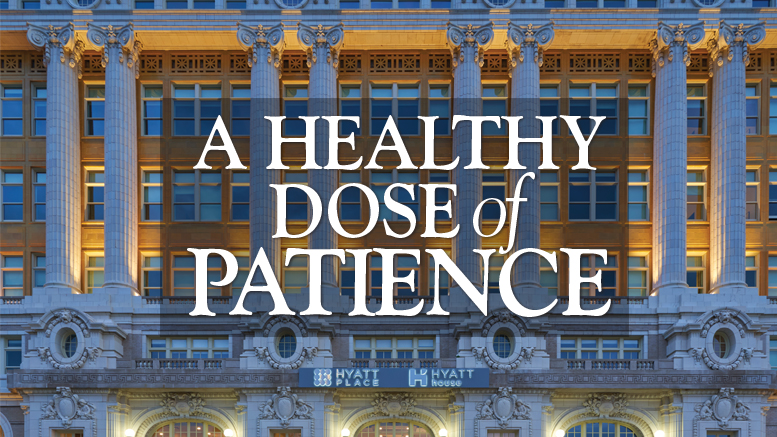 Built in 1914, Cook County Hospital often has been referred to as Chicago’s Ellis Island. The 2-block-long, 8-story Beaux-Arts building, constructed just outside the city’s famous Loop in the Illinois Medical District, or IMD, was built to provide for the growing immigrant population in the city. Word traveled quickly that no matter your income or whether you spoke English, the hospital would care for you. That reputation stuck throughout the 90 years Cook County Hospital served its community.

“While we were working on this building, many of the tradesmen would say, ‘My ancestors, when they came from Europe and couldn’t speak English, knew they could go there and get care,’” explains Ken Johnston, senior project manager with Walsh Construction. The firm served as the general contractor for the 2018-20 rehabilitation project that transformed the abandoned hospital into much needed hotel and restaurant space for the IMD.

In 2015, Cook County put out a request for proposals for the hospital’s next iteration. As part of that RFP, the county offered several other parcels of land it owned in the IMD for development. Civic Health Development Group, a joint venture led by Chicago’s Murphy Development Group along with MB Real Estate, Walsh Investors and Granite Cos., was very strategic about its proposal. “Skidmore, Owings & Merrill was the architect on our team, and one of their real strengths is their master-planning ability,” Johnston says. “We were very clear that our approach was to renovate the old hospital first. I think our presence in Chicago and our approach ultimately got us selected because we knew how important it was to the county to save the old hospital.”

The $135 million project is the first phase of development for Harrison Square, a micro-neighborhood within the IMD. (The entire redevelopment project has a potential of almost $1 billion worth of work.) Cook County Hospital required major interventions after 15 years of abandonment. Among the most important was restoring the historic façade with its ornate terra cotta, monumental columns, and lion and Cupid figures. The historic windows and decaying roof also were main focuses of the exterior rehabilitation.

According to Johnston, the IMD’s location just outside the Loop means it has been “out of sight and out of mind.” Therefore, there weren’t any existing hotels in the area, and food choices for the team during the renovation project were slim. A hotel was a part of the plan for Cook County Hospital very early on, and Hyatt Hotels Corp., which has a major presence in Chicago, was interested in making approximately two-thirds of the building into a Hyatt House, its extended-stay-style hotel, and Hyatt Place, its standard hotel. “Hyatt really liked having the dual brands in the building and they liked the location,” Johnston recalls.

Cook County was interested in 75,000 square feet for medical office space. This left what were anticipated to be two retail spaces within the facility. Dr. Murphy’s Food Hall took 12,000 square feet and another 13,000-square-foot space now hosts a daycare. “I want to say close to 100,000 people a day go to the IMD,
whether it’s for work or other business or something else,” Johnston notes. “To be able to have a place where a doctor or a nurse or anyone working in the area can drop off their kids while they work was super appealing.”

Johnston notes the 345,000-square-foot building lent itself well to this varied programming. “The old hospital is about 550-feet long and 70-feet deep, so it’s almost like a 55-story high-rise just laying on its side,” he says.

The project received around $24 million in historic tax credits, without which it would not have moved forward. The team relied on credits from the City of Chicago Landmarks Commission, the State Historic Preservation Office, as well as the National Park Service. MacRostie Historic Advisors documented the building’s existing conditions, as well as completed the surveys required for tax credits. “Everyone was all for saving the building, but the project and our plans were absolutely scrutinized by all those groups to make sure we were following the guidelines but able to complete the project, as well,” Johnston recalls.

The challenges encountered as part of garnering tax credits were minor in comparison to the challenges of rescuing the building itself. “The county had left the old hospital to die,” Johnston states.

When the design and construction teams set foot in the building, there was no power, no water mains and the roof had leaked for at least 10 years, wreaking havoc on the interior. Despite the fact that the hospital required many more structural replacements than other renovations Johnston has seen, Cook County Hospital was built to last. “Construction at the turn of the century was very heavy-duty,” he says. “If the building hadn’t had that type of construction—its steel structure and columns were encased in concrete, all the decks were almost 2-feet thick with a clay tile arch and a topping slab—the building wouldn’t have been able to put up with the abuse it was getting. I’m very glad it didn’t sit another 10 years though.”