A 164-year-old Michigan restaurant is reborn, thanks to the never-say-die efforts of a husband-and-wife restaurateur team.

A 164-year-old Michigan restaurant is soon to be reborn, thanks to the inspired, never-say-die efforts of a husband-and-wife restaurateur team.

In restoring the White Horse Inn, an equestrian-themed eatery in Metamora, Mich., the pair profited from the untiring efforts of local craftsmen who viewed the restoration as a personal challenge, a timely mix of grants and tax credits and a distinctive roofing product manufactured by a Michigan manufacturer at its Metamora facility. The story starts with the decision of Victor Dzenowagis and his wife, Linda Egeland, to shepherd the inn’s restoration.

The White Horse Inn had been the Wolverine State’s longest-operating restaurant before closing in late 2012. The logical folks to revive the eatery were Dzenowagis and Egeland, who were not only 24-year Metamora residents, but also own and operate five upscale dining restaurants in the Detroit Metro area.

“It had fallen into disrepair and had been seriously neglected over the prior 20 years,” Dzenowagis says. “Given the magnitude of the renovations necessary to bring back the White Horse, we weren’t initially interested in taking on the challenge. After five months of watching the building sit idle and the village decline, we began to look into ways to get some financial support so as to make the massive investment. What it all came down to was that old saying, ‘Somebody ought to do something’, and that somebody was us.”

Once they’d taken on the task of restoring the White Horse, Dzenowagis and Egeland came face to face with the many challenges that effort would involve. “Getting the financing together was difficult,” Dzenowagis says. “We needed grant money. We needed community financial support. We needed to come up with money of our own. And we needed to convince our bank that this was a bankable project. Fortunately, we were able to do all that.”

The owners preferred slate for the restaurant’s roof but couldn’t afford it. They chose Inspire Aledora Slate composite roofing instead.

After a lot of hard work, the couple was able to garner enough grant funding to make the project feasible from their standpoint. Still, Dzenowagis says, “This is more a labor of love than it will be a financial windfall.”

The total budget, including property purchase, is $2.5 million. Funding includes a State of Michigan grant for job creation of $570,000, a Metamora Downtown Development Authority grant of $300,000 and a Federal Historic Tax Credit of $80,000 with the remainder from private money and a bank loan.

A big hurdle was creating a building design that kept the 1850s character of the White Horse but blended in modern amenities, like working bathrooms and a large kitchen to handle expected overflow weekend crowds. “The deterioration of the original building was, and still is, a big challenge,” Dzenowagis says. “The foundation is failing, the wood siding is rotten in many areas, the original windows are in tough shape. It is in the kind of condition you would expect from something built over 160 years ago. Dealing with structural problems within the scope of a historic renovation has been time consuming and expensive. But it’s just part of the challenge when one signs on to a project like this.”

One of the serendipitous early occurrences that helped smooth the process was the discovery of “the perfect architect for the project,” Dzenowagis says. Architect Charlie Veneklase and his architect wife own a Royal Oak, Mich., boutique firm called Von Staden Architects. Veneklase grew up in a 250-year-old house in Connecticut, has an affinity for historic buildings and a love for challenges like marrying an authentic look with up-to-date functionality. 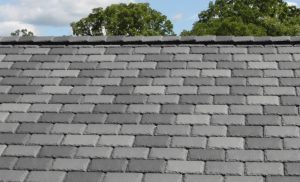 The Inspire Aledora Slate composite roofing fits in nicely with all the other historic details of the building.

“Beyond that, we spent a lot of time doing period research to come up with architectural elements, such as lighting and furniture that work in the realm of our renovation,” Dzenowagis says. “Next, we sought out true craftsmen who wanted to work on this project—who either live in the area or are passionate about retaining historic buildings—to help with the restoration.”

Historic touches have been just as ingeniously incorporated. Dzenowagis and Egeland hired a third generation mason who is using stones reclaimed from a nearby 1880s barn foundation to create the massive, real wood-burning fireplace.

Floors are being hand done by a nationally renowned artisan and fellow Metamora resident named John Yarema, who has worked for the Kennedy family estate. “He has been helping with all the woodwork—floors, beams, columns—and at a price a fraction of what he would normally charge,” Dzenowagis says. “Craftsmen who are as passionate as we are about this project [are] the key to making this all come together.”

Speaking of serendipity, another fortuitous happenstance took place around the time Dzenowagis and Egeland were convening on the topic of the roof of the White Horse with their builder and architect. They discussed cedar shake, standard three-tab shingles, standing seam and slate.

“Our preference was slate,” Dzenowagis recalls. “The characteristics of slate really fit with what we are doing here. Slate is substantial, historic and fits the materials we are using. Slate, though, is expensive, hard to install and relatively high maintenance.”

Not two days after that meeting, a roofing product manager introduced himself to the general manager at the Moose Preserve in Bloomfield Hills, one of the couple’s other restaurants. He told the G.M. that the Inspire brand of composite slate and cedar shake roofing products is manufactured in a Metamora factory and that he was interested in supporting the project. 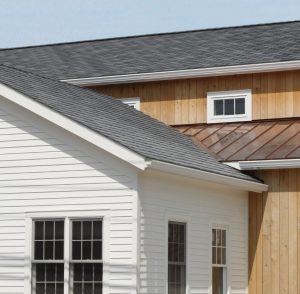 The Inspire Aledora Slate composite roofing is manufactured in the same town in which the restaurant stands.

Dzenowagis soon met with him, and was shown Inspire Aledora Slate composite roofing and immediately fell in love with the product. When the product manager handed a section of Inspire Aledora Slate to Dzenowagis, Dzenowagis braced himself for the heavy weight he knew was coming.
“When he let go of the product sample, my hand flew up in a counter motion because I thought it would be heavier than it was,” he recalls. “It was really amazing. It had the authentic look and the feel of real slate but without all of the inherent negatives of slate. I was concerned that it would be difficult to install. He showed me how it was done and that it was foolproof because of the way the tiles are scribed and marked. I was concerned about performance and durability, and he just started laughing. He said if it was installed properly, the roof would likely be there for the next generation.”

Dzenowagis adds that it achieved the historic look he and Egeland were seeking for the restaurant. “It looks like real slate,” he says. “Roofs don’t get more historic than that. People will probably not believe it isn’t real slate. The engineered variability in the edges makes it look real. With a historic building, we don’t want the roof to stand out and take center stage, but we don’t want it to disappear either. We want it to fit with all other architectural elements of the project: the wood, the stones, the fireplace and others. And Inspire not only fits in seamlessly, it looks just as natural as the original pieces of the restaurant.”

TAMKO To Feature Rick the Roofer at Upcoming International Tradeshows