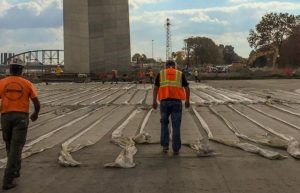 Western Specialty Contractors work to restore and waterproof the roof of the Museum of Westward Expansion located beneath the Gateway Arch on the St. Louis riverfront.

Western Specialty Contractors, St. Louis Branch, has completed a project to restore and waterproof the roof of the Museum of Westward Expansion located beneath the Gateway Arch on the St. Louis riverfront. The work is part of a multi-phase project, spearheaded by the non-profit organization, CityArchRiver Foundation, to expand and renovate the underground museum, plus renovate the grounds surrounding the arch.

Work on the 100,000-square-foot existing museum roof started by removing 16-18-inches of sod and sandy soil, 10-28-inches of Elastizell engineered fill and the existing waterproof membrane down to the structure deck using a bulldozer and air scrapers.

Once the roof was exposed, Western crews went to work identifying and repairing leaks in the existing museum lid that had been present for many years, as the existing waterproofing had exceeded its lifespan. Several methods were used to evaluate the condition of the concrete roof, which included a chain-drag sounding survey for the structural concrete deck, along with visually identifying delamination and cracks.

The next phase of the project involves waterproofing the 42,000-square-foot horizontal lid and 37,000-square-foot vertical walls of the museum addition. Western’s scope of work includes installing 2-ply Laurenco modified bitumen sheet waterproofing covered with WR Meadows PC2 protection board, and installing an electronic leak detection system, along with two layers of 1-1/2-inch 60 psi Dow extruded polystyrene. A layer of 1.5-inch 60 psi Dow extruded polystyrene is being installed on the vertical walls and a J-Drain 780 drainage mat on both the horizontal and vertical walls.

Additional waterproofing of the north and south museum entrances (approx. 13,800-square-feet), which includes approximately 5,000-square-feet of deck around each leg of the arech, was completed in Spring 2017.

The general contractor on the project is McCarthy Building Co.

ARMA Offers a Subscription to Its Shipment Report

Flat-roof Solar Mounting Solution Is Twice as Fast to Install