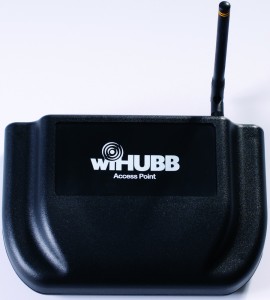 For retrofits in more difficult spaces, Hubbell Lighting developed the wi-Hubb, which utilizes wireless technology to communicate with controls rather than through traditional hard wiring.

LEDs and Lighting Controls Are Sought by Building Owners

When Thomas Edison introduced the first practical incandescent light bulb in 1879, it was hailed as one of the greatest inventions in history. It’s amazing how things have changed in a relatively short period of time, historically speaking. While incandescent lamps are in the process of going the way of leaded gasoline and leisure suits, there is plenty of new technology to fill the void. Jesse Smith, LC, MFA, senior lighting designer with Glumac, a sustainable engineering firm located in Portland, Ore., provides some insight into some of the current trends in the lighting industry. 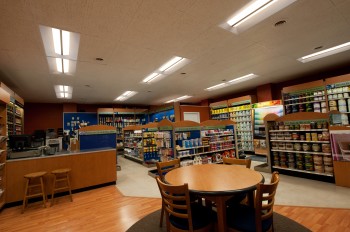 Cree developed the CR24 LED for use when retrofitting spaces
that formerly had troffer fluorescent fixtures.

According to Smith, it is clear LED, or light-emitting diode, technology is here to stay. LEDs are illuminated when electrons move in a semiconductor material. Their claim to fame is their long lifespan, which can exceed 50,000 hours, while using less energy than other forms of lighting.

When LEDs were first introduced as architectural lighting, the products on the market didn’t always perform as expected. They often had varying degrees of color temperature, less than advertised life and were expensive. The good news is those days are behind us; manufacturers are creating new and better LED products in force.

Smith says there hasn’t been a project he has worked on in the last three years that didn’t have at least some component of LED lighting. In fact, his firm recently designed its first all-LED-lit office floor, a 30,000-square-foot space in a Portland building.

All the major lighting manufacturers have increased their LED product offerings for new fixtures and retrofit applications. Smith estimates there are currently more new fixtures being designed than retrofits for older fixtures. However, designers still have to be careful with fixture selection. “LED lighting was originally used in down-lighting applications, where it functions beautifully,” Smith asserts. “Now we’re starting to see it in applications, like direct/indirect fixtures where you have to have two separate rows of LEDs, one shines up and one shines down to create the effect. Sometimes it’s not the most efficient use of the technology. There are still applications where a high-efficiency T5 or T8 fluorescent lamp still makes a better choice.” 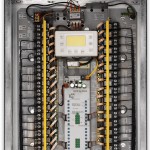 The GR 2400 from Lighting Control & Design by Acuity Brands is a lighting-control
system that utilizes a low-voltage CAT-5 cable for wiring that is simpler to install in most spaces.

Smith says the No. 1 request he receives from clients is to use LED lighting wherever possible when it makes financial sense. He notes clients don’t always understand the proper application and limitations of the technology. “The marketing people have done a good job of getting the word out about LED lighting to building owners,” Smith says. “I often educate clients about where we should be implementing LEDs and where it might make sense to use something else.”

Despite the fact that LEDs aren’t a perfect fit for every application, Smith makes a conscious effort to reduce the number of different types of lamps required in a building. “From an operations and maintenance standpoint, it just makes sense,” he says. “When you have too varied a combination of linear fluorescent, u-tube fluorescent, metal halide and any other type of lamping you can think of, it’s difficult on the maintenance staff to keep track of them all. Too often we’ve gone back into projects and clients have installed two or three different color temperatures in the same fixtures. The effect is completely different than we designed it, so we try to make it as simple as possible.”