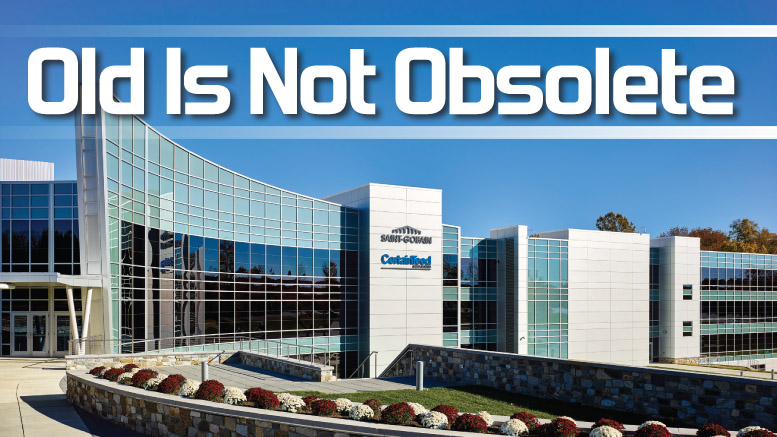 When the North American division of Saint-Gobain decided to relocate to a new headquarters, first priority of company representatives was simple: They wanted their new home to be iconic. It’s easy to see why. 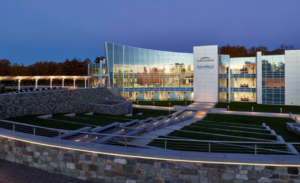 The Saint-Gobain and CertainTeed Headquarters features a 25,000-gallon tank that collects rainwater for the fountain and landscaping system. In addition to the fountain feature, the headquarters boasts a pond and 1.3 miles of walking trails.

Saint-Gobain was founded in France in 1665 and has since become the largest building materials manufacturer in the world. For 350 years, Saint-Gobain glass has formed the basis for iconic structures, such as the Hall of Mirrors in Versailles, France, and the Louvre Museum in Paris.

The company has had an international presence for three centuries, having participated in at least one World’s Fair and operating in 66 countries. Saint-Gobain survives and thrives because of its staunch commitment to quality, its employees and sustainability.

But to deliver the visionary new head- quarters building Saint-Gobain and its North American subsidiary CertainTeed Corp. desired, the project team would have a challenge; it was required to effectively reposition an aging architectural experiment into a shining celebration of the international corporate giant that now lives within its walls.

Faded Jewel Comes Back to Life

How this extraordinary facility arose out of an abandoned corporate campus is in part because of each project team member’s unwavering commitment to sustainable design. The developer, Eli Kahn of E. Kahn Development, Downingtown, Pa., long had his eye on the 65-acre suburban corporate campus in Malvern, Pa. Although unoccupied for years, Kahn was convinced the site was a diamond in the rough and knew there would be immense value in breathing new life into it. 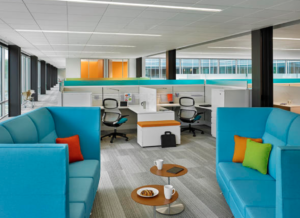 The headquarters showcases 40 products—eight on the exterior and 32 in the interior—from Saint-Gobain’s family of companies. Because it is a living laboratory, the company’s research team is collaborating with the University of Oregon to assess the impact of the headquarters on occupant behavior.

The two original buildings were designed by renowned Philadelphia architect Vincent Kling, one of the most influential mid-century modernists in the region. They were built in the 1960s with a modern glass and exposed steel structure, including the use of Cor-Ten steel, a weathering steel intended to rust quickly and form a protective coating on the exterior of the buildings.

Unfortunately, the very choices that made the original project an architectural icon ultimately created disadvantages to its long-term success. The steel did not weather properly and created unappealing rust stains on the facade. The two buildings, with a combined area of more than 200,000 square feet, were built on different elevations with just a small connecting corridor. Plus, because the buildings were mainly glass and steel, there was virtually no insulation and no thermal break from the exterior to interior steel frames. Tenants could barely afford the energy costs that were required to operate the buildings.

The prior occupant vacated the campus in 2009 and the huge, disintegrating structure sat vacant for more than six years. When Saint-Gobain representatives were introduced to the site as part of their search for a new home, an important question arose: Should they choose a new, empty site where they could build a new building or was it worth trying to revive this aging white elephant? 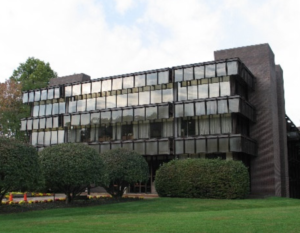 BEFORE: Unfortunately, the very choices that made the original project an architectural icon ultimately created disadvantages to its long-term success.

Although inefficient and visually unappealing, the old buildings and HVAC systems were fairly well maintained despite their years of vacancy. The campus was plentiful in natural features with a forest bordering one side, a pond, stream, natural walking trail, and wide swaths of land, which would provide beautiful vistas for future employees.

However, if the buildings were to be repositioned, it would require a feat of “deep renovation”, as one member of the project team described it. To create the new building envelope, the old building had to be stripped down completely to its core skeletal structure. The occupants of the new headquarters would not be able to navigate freely within the existing two-building structure, so an addition would be needed to turn the two disjointed buildings into one seamless structure.

Neil B. Liebman, AIA, LEED AP, is a principal of BERNARDON, an architecture, interiors, and landscape architecture design firm in Kennett Square, Pa., and Wilmington, Del. He has more than 35 years’ experience in designing corporate headquarters.