A major international pharmaceutical company began looking at greenfield sites throughout New Jersey in 2008. Its primary goal was to find a campus large enough to accommodate all its employees. The private equity firm Ivy Equities of Montvale, N.J., suggested that representatives consider the former Merrill Lynch site in Plainsboro, N.J. Constructed in the 1980s, the 770,000-square-foot building boasted a 200-acre, park-like setting in a strategic location just minutes from Princeton University and equidistant from New York City and Philadelphia. However, the early ’80s aesthetics—heavy concrete façade with dark-tinted windows—and the lack of daylight penetrating the interior were so unappealing that the pharmaceutical company executives rejected the property proposal without touring the existing building. 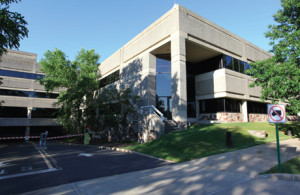 A joint development team composed of LCOR, Ivy Equities and Intercontinental Real Estate saw the site’s potential and commissioned the architectural firm of Granum A/I of Radnor, Pa., to develop concepts for a retrofit that would give the structure the aesthetic and amenities appropriate for the U.S. headquarters of the ninth-largest pharmaceutical company in the world. Designing to meet the standards for LEED Silver certification, Granum developed a new aesthetic for the building, which embodies the principles of Danish design, including functionality, innovation, openness, quality and aesthetics; Nordic tradition, such as natural light, clear colors and integrity in choice of materials; and functional architecture, like simple shapes, clean lines and logical solutions.

The design proposed by the architects specified a new, energy-efficient skin of unitized curtain wall paired with Reynobond Aluminum Composite Material (ACM) for the building. To help support their efforts, the project architects conducted an analysis of the building’s planning efficiency and worked closely with the project’s construction manager to estimate construction costs of the proposed renovations. Their results demonstrated that, due in part to the existing building’s complex shape, the retrofit building would be only 8 percent less efficient than a new construction option when comparing the amount of space needed to accommodate the same employee headcount. Furthermore, the analysis proved that retrofit construction costs would be significantly less than new construction costs, even when factoring in a new building skin and extensive interior modifications. When these findings and proposed design renderings of the transformed site were presented to the pharmaceutical company, the site became a contender, and in January 2011 the company decided to lease the property.

The construction began by stripping the building of its concrete shell. The team replaced the façade with a new enclosure combining glazed curtainwall with spandrel glass detailing at the floor and roof lines and metal panels with a zinc-like finish to create a sophisticated, contemporary exterior. A new 2-story lobby was created at the main entrance by removing an existing mezzanine and moving the exterior wall out to a point just beyond the existing columns. The front and back walls of the new lobby are defined by floor-to-ceiling glass. A metal-clad portal was added to provide weather protection. 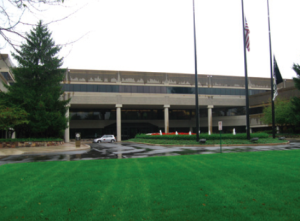 Before: A joint development team saw the building’s potential and commissioned the architectural firm of Granum A/I to develop concepts for a retrofit. PHOTO: Patrick McGranaghan, AIA, LEED AP

“The original structure had darkly tinted glass alternating with heavy horizontal bands of concrete,” says Patrick McGranaghan, AIA, LEED AP, design principal for Granum A/I. “In that rigor, it was boring. We chose to create interest by playing with the geometry of the building—using glass as the primary material on the façade and using metal more compositionally to give the building more character, emphasizing the diversity in the architectural forms that define the exterior of the building. The material selected for the façade had to be lightweight and extremely durable so it could be mounted to the new curtainwall modules. We used ACM because it meets the technical performance criteria and has a wonderful surface quality. We chose Reynobond ACM because it’s a proven product.”

The architect’s relationship with the fabricator, BAMCO Inc. of Middlesex, N.J., was key to the success of the project. The construction manager for the project, Structure Tone of Woodbridge, N.J., brought BAMCO and Granum together at the beginning, working as a team to develop an approach to the transformation project. Whereas Granum A/I had responsibility for defining all aspects of the exterior building design and for the complete tenant fit-out, HOK joined the team and served as architect-of-record for the building core and shell work. 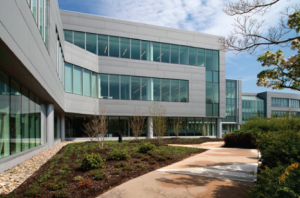 After: Designing to meet the standards for LEED Silver certification, Granum developed a new aesthetic for the building—inside and out. PHOTO: Mark Kempf Photography

“The client wanted the metal to have a natural look,” notes Bob Balaam, vice president of sales for BAMCO. “We originally estimated the project with natural zinc, but it was cost prohibitive. When Alcoa Architectural Products (AAP) introduced the Reynobond Design Line paint finishes, we were so impressed by the natural appearance of the collection’s finishes that we brought a sample panel in the Zinc Patina finish to the client. It is the only painted finish offered by an American manufacturer that presents a true zinc finish, right down to the grain.”

“The design team and our client loved the Design Line Zinc Patina painted finish. It provided the aesthetic we wanted and was cost effective. It has a grain that picks up the light in an interesting way at different times of the day, in much the same way that a fine cloth responds to the presence of daylight,” McGranaghan adds.

The architects also incorporated Reynobond in two additional painted finishes to give the façade more depth and architectural interest. Reynobond ACM with an Anodic finish was used on projecting frame elements and window openings to create a contrast with the adjacent walls. The finish picks up the light and gives a little sparkle that works with the glass. Reynobond ACM with a high-gloss Toyota Silver paint finish was specified for the large portal element—a three-sided, 24-foot-high by 130-foot-long glass entry—to enhance the reflections in the glass. “The wall seems to disappear, because your eyes see only the reflection,” commented McGranaghan. The effect is enhanced further by reflections off the sheeting water flowing from a fountain element in the courtyard. 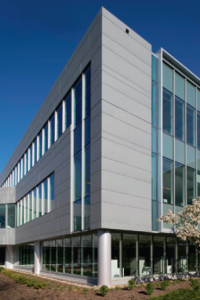 Furthermore, the analysis proved that retrofit construction costs would be significantly less than new construction costs, even when factoring in a new building skin and extensive interior modifications. PHOTO: Mark Kempf Photography

Full-height glass and aluminum curtain walls were used to define the new two-story lobby and adjacent stairwells. After considering how to combine desirable aesthetics, proven performance and available design options, the architect specified products by Kawneer, AAP’s building and construction systems partner. Paul Rabinowitz Glass Co. Inc., of Philadelphia, fabricated and installed Kawneer’s 1600 Wall System, with 10 1/2-deep vertical structural silicone glazed (SSG) mullions, at the lobby; the four-side captured 1600 Wall System curtainwall with 10 1/2-deep mullions for the stair tower; and 6-inch-deep mullions for the vestibule area. To add the required strength for the larger spans, structural steel reinforcing was used as well as custom steel anchors to tie the curtain wall systems to the building’s structure. The interior components were painted in a custom white paint and the exterior components in a custom silver paint. Kawneer 350 Medium Stile Entrances were outfitted with custom hardware options and installed in the curtain wall to provide durable and aesthetically pleasing entrances for the building.

To preserve the natural beauty of the site, the trades were given access to the site through a five-foot-wide swath cleared around the building. To work within those confines, the architects chose an economical, unitized curtain wall system normally reserved for use on multistory towers, which was lowered into place by a huge crane. Each unitized four-foot-wide segment spanned the full two-story height of the structure. BAMCO then used swing stages to install 12-foot-long (by 1-, 2- and 3-foot-tall) Reynobond panels in an Ashlar pattern over the aluminum pans in the curtain wall. The panels spanned across several units in the curtain wall, requiring BAMCO to account for the expansion and contraction of the individual units beneath the ACM, which had a free-float under the G-500 system. The multiple slots required for the staggered joints in the Ashlar pattern added to the challenge. 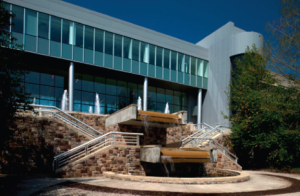 Another hurdle for the team was the accelerated construction timetable. “Normally a job this size would take two years to finish,” continues Balaam. “We completed our job in nine months—beginning in March and finishing in December.” To work within the required timetable, BAMCO had eight crews working simultaneously on different areas of the building.

The $215 million redevelopment and construction were completed in April 2013. The building is a quarter-mile long with a series of office pods intersecting the central circulation spine. In addition to the highly efficient building skin, LEED elements include a new roof that minimizes the heat island effect, low volatile organic compound (VOC) materials and the use of low-flow technology. Amenities include an executive suite; a rooftop terrace; recreational facilities; a 500-seat, full-service cafeteria; parking for 2,210 cars; and access to public transportation.