“Architects have to become designers of ecosystems. Not just designers of beautiful façades or beautiful sculptures, but systems of economy and ecology, where we channel the flow not only of people, but also the flow of resources through our cities and buildings.”—Bjarke Ingels

If Ingels’ assertion about the nature of buildings as ecosystems is correct, then it stands to reason that investment capital is the wellspring from which the built environment originates. Without it, the economy and flow of resources through our cities is choked, and the promise our buildings once held as living systems to support urban life is crushed.

As many local redevelopment projects fail due to lack of funding, our aging infrastructure isn’t the only thing that suffers; entire communities absorb the economic fallout, to which many cities in America’s Rust Belt bear witness, for example.

However, hope for the restoration of existing buildings and communities is surfacing from a somewhat unlikely place: social media. Just as crowdfunding sites like Kickstarter and GoFundMe have made artistic, entrepreneurial, and fundraising projects hugely successful, a number of similar platforms are emerging in the commercial real-estate arena and opening up new channels for real-estate investors large and small.

To the uninitiated, crowdfunding—defined as “the practice of funding a project or venture by raising many small amounts of money from a large number of people, typically via the Internet”—and real estate may seem like strange bedfellows. However, as Brian O’Conner of online financial education platform Investopedia notes, “the two ‘odd couples’ appear to be pairing up quite nicely and giving investors a new way to leverage profits from the burgeoning U.S. real-estate market.” 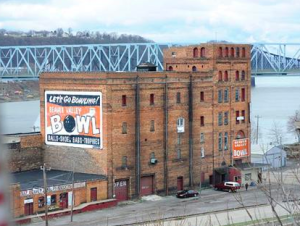 Pittsburgh-based Small Change, which matches developers to investors, has plans to help spur the development of a building in Rochester, Pa., to become a brewery. PHOTO: Small Change

In fact, the size of the combined real-estate and crowdfunding market is estimated at $11 trillion, according to crowdfunding site iFunding, and active global crowdfunding platforms generated $16.2 billion in 2014—a figure that is expected to more than double in 2015 to $34.4 billion, according to crowdfunding research firm Massolution, Los Angeles. Further, Massolution found the number of crowdfunding platforms jumped from 308 in 2013 to 1,250 in 2014. In other words, what was once a niche business model for hopeful entrepreneurs who might not have been able to attract traditional financing is now a bona fide investment vehicle for investors of virtually every size. And it took an act of Congress (literally) to legitimize the concept.

Recognizing cost-effective access to capital for companies of all sizes plays a crucial role in the health of the nation’s economy, President Obama signed the Jumpstart Our Business Startups (JOBS) Act into law on April 5, 2012, which basically requires the SEC to simplify the regulations for investors to fund startup businesses. Title III of the JOBS Act specifically addresses equity crowdfunding for real-estate investing but, to date, only accredited investors (those with incomes or net worth that meet SEC requirements) are able to participate. The SEC has yet to write rules for equity crowdfunding by non-accredited investors, which has led many states to write their own that only apply within their boundaries.

In the meantime, several crowdfunding platforms are leading the way toward restoring our buildings, communities and cities, making the most of this emerging tool for financing our futures.

When it comes to retrofits, often the buildings most in need of upgrades are the ones in the most underserved communities without access to traditional financing. The result is a sort of Catch 22 in which building owners who want to participate in energy retrofitting for economic reasons are unable to do so … for economic reasons.