The Dodge Momentum Index advanced 1.4 percent in August 2013 to 114.2 (2000=100), according to McGraw Hill Construction, a division of McGraw Hill Financial. The Momentum Index is a monthly measure of the first (or initial) report for nonresidential building projects in planning, which have been shown to lead construction spending for nonresidential buildings by a full year. The Momentum Index had essentially leveled off during June and July, following the steady gains that were reported during the first five months of 2013. With the August increase, the Momentum Index resumed its upward track and is up 27 percent compared to the same month a year ago. While the overall economy remains sluggish, the prospects for commercial development continue to show improvement, as reflected by the growing volume of projects at the planning stage and such strengthening market fundamentals as occupancies and rents.

The August Momentum Index was bolstered by an upturn for its commercial segment, which climbed 3.7 percent. Among the larger commercial projects to enter the planning phase in August were several office buildings: a $100 million renovation to the Health and Human Services Building in Rockville, Md., a $90 million office building/mixed use development in Arlington, Va., and a 41-story office tower in Houston. The institutional segment of the Momentum Index, meanwhile, retreated 0.7 percent in August, marking its first monthly decline since February. Gains for amusement and health-care projects were offset by a larger decline in plans for educational buildings. 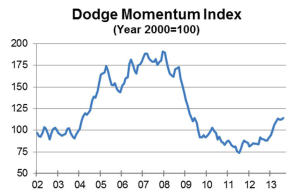 Stone Wool Ceiling Panels Are Easy to Clean and Disinfect