The latest month’s increase for the Momentum Index was driven by both its commercial and institutional components. On the commercial side, the 1.5 percent gain was largely the result of greater planning activity for office and hotel development. Among the larger office projects to enter the planning pipeline in December were the $350 million Moffat Place Office Campus in Sunnyvale, Calif.; the $300 million Boston Garden Office Tower in Boston; and the $95 million expansion of a Microsoft data center in Quincy, Wash. The 0.8 percent gain for the institutional component was due primarily to a pickup in plans for education-related buildings, the largest of which were a $120 million renovation/addition to the University of Michigan’s School of Dentistry in Ann Arbor; a $100 million Nuclear Power Training Facility in Charleston, S.C.; and a $90 million renovation to the University of Dearborn’s Engineering Laboratory in Dearborn, Mich. 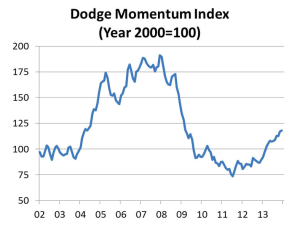