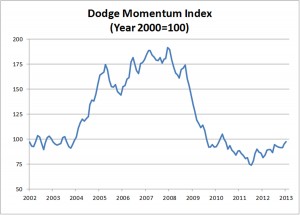 January’s increase for the Momentum Index relative to December was the result of stronger activity for commercial and institutional segments. The 3.1 percent gain for the institutional segment in January was driven by a surge in new hospital projects entering the planning pipeline. These included a $202 million second phase to the Advocate Christ Hospital Patient Tower in Illinois and an $80 million expansion at the Geisinger Medical Center in Pennsylvania. The 2.3 percent gain for the commercial segment in January reflected an uptick in plans for new offices and stores. These included such projects as a new Chevron Office Complex in Texas and a mixed-use tower in San Francisco, which entered planning.