The North Jackson Elementary School gym in Jefferson, Ga., is a typical metal-framed structure that houses a full-size maple hardwood basketball court, as well as offices and restrooms. In addition to daily P.E. classes, most school functions (assemblies, graduations and general meetings) are held in the space. A traditional air-conditioning conversion for this space would involve a package unit on the ground and fabricated ductwork running up the side of the building, through the gymnasium wall and down the center of the gym. The primary issue with this standard application is associated cost. 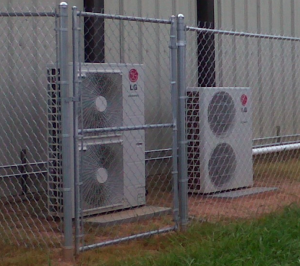 An LG Flex Multi-Quad Zones system was used to retrofit the cooling system for a Georgia school’s gym.

The school estimated costs of nearly $15,000 to convert the 200-amp single-phase electric service to three-phase to meet the needs of a 30-ton package unit. Necessary ductwork was estimated at another $15,000 and associated equipment costs were close to $22,000. At a price tag of nearly $52,000, the project was not likely to gain approval from the board of education.

Josh Patton, the HVAC foreman for Jackson County Board of Education, had recent experience with using LG duct-free products during a cafeteria conversion he completed in June 2011. Patton used LG Multi-F products to provide supplemental cooling in the cafeteria space as a cost-effective alternative to adding ductwork. The school district was impressed with the performance and efficiency of the duct-free solution.

In partnership with the local LG representative and wholesaler, Patton proposed a design that met the cooling requirements based on load calculations for the gymnasium space while working within the board of education’s budget restrictions. The resulting LG Flex Multi-Quad Zones system includes eight indoor units around the perimeter of the gym discharging air toward the center and three ceiling cassettes in the center of the gym discharging air in a four-way pattern. The indoor units and seven outdoor units operate independently and provide load-matching capability beyond a single system utilizing a single thermostat.

During a graduation ceremony in May 2012, the gym was able to maintain setpoint (68 F) with nearly 400 people present. “I had hoped we could maintain 78 to 80 degrees [F], and can’t believe how well the system performed under these conditions,” Patton says.

Using the inverter technology not only enabled the school to stay within budget, it came in below the estimates for conversion. Georgia Power provided a rebate for using the high-efficiency systems to further offset the costs. “I saved more than $10,000 by using these systems on this job before we even factored in operating savings,” Patton adds.