Built in 1889, The Algonquin Resort opened in Canada’s first seaside resort town, St. Andrews, New Brunswick. The resort was originally the Canadian Pacific Railroad Hotel, and has seen a lot of changes over the years, with the most recent, a more than $30 million renovation project, reopening as the first Marriott Autograph Collection Hotel in Canada. 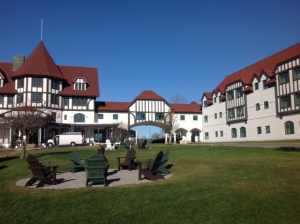 According to a Sto representative in Canada, the Algonquin Resort was a solid concrete building with no insulation.

According to a Sto representative in Canada, the Algonquin Resort was a solid concrete building with no insulation. It had a 1 1/2-inch-thick stucco and several other issues, including 1 1/2-inch holes to fill in on the original boards. Compound that with cold, damp, miserable weather part of the year, and that creates all sorts of problems.

Fortunately, the folks at FundyPros, a contractor in New Brunswick who is known for its exterior insulation finishing system (EIFS) work, received a call from the architectural firm, Architects Four Limited, and FundyPros knew just who to call to help preserve the same beautiful architectural design. Mario Allain, president of FundyPros and Freddy Williams, project supervisor and EIFS installer for 27 years, called on Sto Canada, who created mock-ups, which were presented to the hotel. It was an easy sell, according to Allain, as the customer wanted to insulate the building and the Lotusan finish was also a great selling feature to keep the historic hotel looking good and clean for years to come. 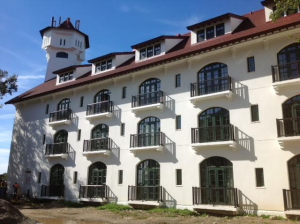 The EIFS system helps to insulate the building and the Lotusan finish helps to maximize the historic hotel’s curb appeal for years to come.

“The EIFS system was exactly what we needed in order to insulate and maintain the heritage characteristics of the resort,” says Dianne VanDommelen, president of Architect Four Limited. “Maintaining the historical look was of utmost importance and by using Sto, it was possible to replicate the original façades. We, and the client, are very pleased with the results.”

Allain explained that his team needed to prep and repair some of the cement before applying the Sto system. It took 14 months with 22 applicators to complete the exterior of the project. During the cold, winter months, they used insulated tarps, which heated and protected the building. The group worked on the renovation section by section on the 80,000-square-foot building. The owner and the architect knew what they wanted and Sto Canada and FundyPros were able to provide the solution.

FundyPros works with other EIFS companies, but according to Allain, the technical support, deliveries, services and professionals on the sales team at Sto do a great job. “The people at Sto are passionate about what they are doing, and as an owner or contractor it is good to have that support,” says Allain.