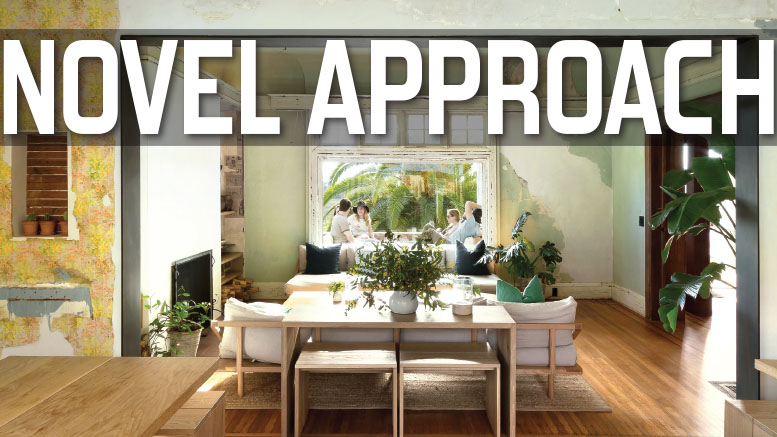 In the world of wine, each glass recounts a story: about its grapes of origin, the region it was grown, the properties of the soil and the care that went into production. At Scribe Winery in Sonoma, Calif., the land and structures have stories to tell, too: about its history, ecology and layers of culture. To preserve the winery’s tale and highlight its character for visitors, the owners tapped a group of collaborators, including San Francisco-based Aidlin Darling Design.

“This property was incredibly dynamic, both ecologically and historically,” says David Darling, principal at Aidlin Darling Design. “Some of the stories we wanted to reveal are macro-scaled, like the transformations of place and its connection to the land. Others were micro-stories that show up in unusual places and quirky ways.”

Resting at the base of Arrowhead Mountain on the edge of a forested wilderness, the 250-plus-acre property had been inhabited by Native Americans, transformed into a vineyard in the mid-1800s, became a password-protected speakeasy and stopover for bootleggers during Prohibition, and was repurposed into a turkey farm after that. Two brothers, Andrew and Adam Mariani, purchased the property in 2007 with plans to restore it to its vineyard roots. Aidlin Darling Design helped the Marianis envision an overall masterplan and obtain a Sonoma County use permit.

The use permit required numerous environmental studies. During one site report, the landscape architect discovered the land was part of the San Francisco Bay watershed, which classified it as gray whale habitat. “That gave us a starkly broader perspective of what site and site impacts mean,” Darling says.

The Marianis grow Chardonnay, Pinot Noir, Riesling and Sylvaner grapes onsite. Ruins from several late-1800s buildings throughout the property were carefully preserved and now frame a variety of outdoor tasting venues. Nearly all of the concrete turkey barns from the site’s turkey farming days were demolished and reused as backfill material, but one turkey barn remains as a nod to the property’s most recent chapter. The team repurposed this concrete barn into a wine cellar.

The first phase of the masterplan converted the basement of the site’s 1960s suburban home into a wine cellar and tasting room. The team widened the basement opening and built a custom slide-in door, creating enough space for a long table to host dinners. Situated on the slope of the hill, the tasting room affords visitors a spectacular view of the vineyard across to the hacienda, the property’s main structure.

The hacienda is the 4,043-square-foot dwelling originally built from onsite stone in the 1850s. In 1915, it was transformed with brick and stucco into a Mission Revival-style building, the first of many subsequent interventions. “The hacienda is a weird mix of styles with additions that span more than a century. The result is an incredible collage from different eras,” Darling describes. “Our goal was to try to make the interactions between the different layers legible.”

The Marianis wanted the hacienda to support their guest-chef program, providing light meals and a relaxation space for visitors, and become a guest house. But the building had been abandoned for decades. Open to weather (daylight even crept through some of its walls), it was nearly crumbling under its own weight. Still, it remained an iconic structure in the region, and the Marianis volunteered the idea to the county to designate it as a landmark.

When Bill Schaeffer, operations manager and a co-owner of Cello & Maudru Construction in Napa, Calif., joined the team, he quickly realized the hacienda’s formidable challenges. The project vision was to leave the hacienda exactly the way it was and upgrade the electrical and plumbing, but the building envelope was cracked and spalling, and converting it to a commercial space would require a full seismic upgrade.

To preserve as much of the interior as possible, major work took place from the outside. “We surgically took the building apart, cataloged the materials, sensitively repaired and reinstalled them,” Schaeffer says. “Even the casual observer can see that it’s been lovingly preserved.”

Challenge Yourself for a Better Mind, Body and Spirit