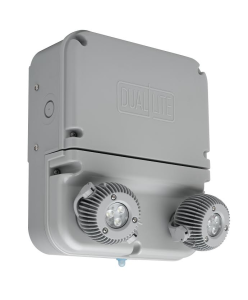 Dual-Lite’s Dynamo’s two-sealed aluminum, heat-dissipating lamp-heads emit bright and even illumination patterns, outperforming any Krypton, incandescent or halogen-based lamp up to 50 watts. The Dynamo’s advanced battery lasts two to four years longer than competitor battery technology used in this category of luminaires, and is environmentally friendly, with no hazardous chemicals. The luminaire comes with a micro-controller-based, three-stage charger and provides a minimum of 90 minutes of illumination without light degradation when primary power is lost.

Developed with versatility as a top priority, the Dynamo can be installed in the harshest environments—from extreme heat to cold—and is available with an optional impact-resistant shield for wash-down in food processing facilities. Its universal mounting plate enables the luminaire to mount to any wall, truss or pole easily at mounting heights from 7 to 20 feet.

The Dynamo is the first emergency egress luminaire to meet the forthcoming energy consumption requirements of Title 24, using less than 0.5 watts in battery maintenance mode.