On average, 30 percent of the energy consumed in commercial buildings is wasted, mostly because of outdated and inefficient systems and equipment and because most have not been subject to the current (if any) energy requirements. Buildings still operating under the requirements of ASHRAE Standard 90.1-1989 consume about 45 percent more energy than those complying with Standard 90.1-2010. Proper building energy-code application offers one of the most effective ways of reducing this waste.

Every year approximately 5 billion square feet of floor space is renovated in the U.S. By 2035, renovated buildings will make up an estimated 38 percent of all U.S. buildings, and approximately 75 percent will be new (built between now and 2035) or renovated. This is a grand opportunity for energy codes to drastically improve the efficiency of buildings and cut into commercial energy waste. 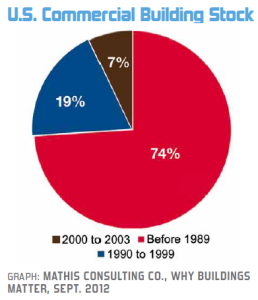 With such opportunity to raise the energy bar for so many buildings, it is important to ensure codes are properly applied and meet their potential. In a 2010 Washington, D.C.-based Alliance to Save Energy analysis, assuming average baseline energy intensity (energy consumption) of existing commercial floor space is 143 kBtu of source energy per square foot and the average baseline performance of a major commercial renovation is equal to minimum performance under the 2006 IECC, the potential energy savings resulting from the application of the 2012 IECC on existing commercial buildings is 14 kBtu per renovated square foot. This translates to a 10 percent reduction in energy consumption compared to that of existing commercial floor space with no energy codes applied.

Additional studies project that around 27 billion square feet of commercial floor space will be renovated between 2013 and 2030. If all this commercial floor space could meet just the 2012 IECC, annual energy savings would be more than 0.35 quadrillion Btu by 2030—the equivalent of powering 9 million U.S. homes for a year or the amount of energy generated every year by eight nuclear power plants.

Unfortunately, businesses and households commonly avoid making such energy upgrades because of the seemingly high costs. Although an initial investment is needed, it is clear the resulting profits the building owners see will be worth any risk. Even though many companies often prefer growth investments that expand production and product offerings instead of cost-savings investments, these energy
investments offer greater and more immediate returns.

Although buildings undergoing renovation are likely to trigger mandatory energy-efficiency provisions under the IECC and ASHRAE Standard 90.1, they are often overlooked or ignored because of low awareness about how and when to apply the codes to renovations. There are four major categories that dictate whether a project must meet an adopted energy code: additions, historic buildings, renovations or alterations, and changes in occupancy.

Although all historic buildings are exempt from meeting the code, the other three categories have stipulations that can trigger energy-code requirements.

Maureen Guttman, AIA, is a licensed architect with more than 25 years’ experience in energy-efficient and green-building design. As the Washington, D.C.-based Building Code Assistance Project’s executive director, she has overseen the launch of a nationwide campaign to support the adoption of today’s model energy codes.

Be the first to comment on "Energy Codes Make Renovations Profitable"