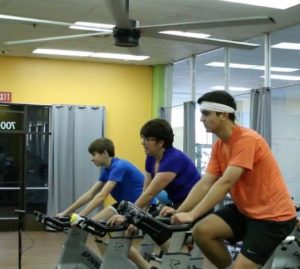 The MacroAir fan is strategically placed in the cycling studio for the best airflow.

After decades of working with athletes out of her home, during outdoor bike rides, and venues like races, Rachael Wilson opened her own studio, Bikecoach. The studio combines fitness and cycling to develop strength and road safety skills.

Rachael renovated an existing commercial store for her cycling studio. She incorporated a bright color palate, creating an invigorating space. Tons of little outlets were installed to plug in small oscillating fans to keep the riders comfortable. One of Rachael’s friends suggested skipping the small fans and installing one really large fan that would circulate air throughout the whole room.

Being a small business owner, Rachael researched other brands and found that nothing was as sleek as MacroAir’s fan.

“The fan looks like an artist and an engineer got together. The body where the motor goes is nothing compared to what it can do – proportionally it seems crazy that it can put out all that airflow.”

MacroAir used AirViz, its computerized airflow visualization software to figure out the best location for the fan. Bikecoach is an “L” shaped facility. Rachael states, “At first glance, it would make sense to put the fan in the middle of the triangle, and although it might look neat there, it doesn’t really do what you need it to do.”

With AirViz, Rachael was able to view a variety of fan placements and the corresponding airflow. “It was neat to move the fan around in the space and see how the airflow changed. We shifted the fan toward the cycling area to offset the body heat from the cyclists, cool off these hot windows, and send more airflow into the strength training area.”

“We haven’t turned the air conditioning on a single time since the fan went in. My bills were high. It was the heat of summer, and we were doing a lot of in and out during construction. But even when we shut the doors, the heat was coming through, and we had to run the air conditioner. The bills were scary – they were half-again as much as the rent. The fan went in, we turned off the A/C, and the first bill was half. The fan will pay for itself.”

Rachael advises other small business owners, “Just do it. If you know you are going to be in a situation where you need a lot of airflow all the time, you’re going to need a large fan. You could go the little fan route, but then you’d have the problem of them being tacky, and they break, and they don’t work that great, and there are always hot pockets in the room. A MacroAir fan does it all.”