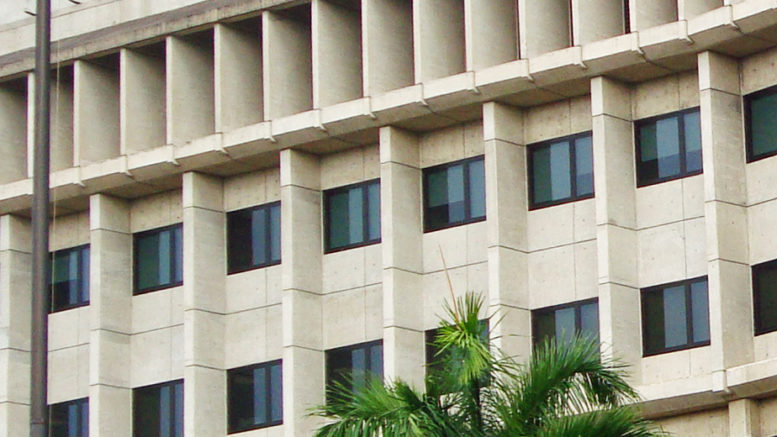 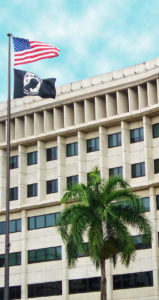 The Retrofit
Glazing contractor, Koch Corp., installed six types of windows to meet the various security and environmental requirements of the federal building, including energy efficiency, ballistic and blast mitigation, and moisture- and hurricane-resistance. The project was one of several funded in Puerto Rico by the federal government. The window replacement was funded as part of the U.S. General Services Administration’s (GSA’s) Security Enhancement, Glass Fragmentation Program.

Both buildings were designed in the 1970s by local architects O’Kelly, Mendez & Brunner and Miami-based engineers Smith, Korach and Associates. The architectural style is described by some as “Brutalist Modernism.” According to Anna Raykis, PMP the project manager with the Design and construction Division of the GSA Public Building Service Northeast and Caribbean Region, the existing windows were original to the building and showed signs of significant deterioration. Raykis cautioned, “The performance criteria for these windows are not typical.”

Koch Corp. served as the general contractor, as well as the glazing contractor using Koch’s team and local tradespeople. The window replacement portion of the project began in May 2010 and was completed it May 2012. The buildings remained fully occupied and operational throughout the renovation. 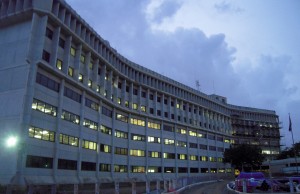 “It was quite a difficult job and we wanted an exceptional engineering team. We didn’t want to go in with an untested company. With Wausau, we invested the time and resources and came up with a good plan to do it right,” says Benjamin Feinn, Koch Corp.’s CEO. “We shared a good old-fashioned attitude that we’re in this together and it turned out very well.”

To minimize disruption for the occupants, different approaches were considered, including performing the work from either the interior or the exterior. The latter approach was deemed more suitable to meet the project installation schedule and would provide the least amount of occupant interruption. Pipe frame scaffolding was installed in phases around the building perimeter. A different sequence, however, was used for each building.

For the federal building, the glazing team began at the top, on the 7th floor, with the north (front) façade, followed by the south (rear). Once this floor was completed, they moved to the 6th floor, beginning again at the front of the building and then to the back, and progressed down the building. All work was performed at night.

After the last of the federal building’s basement rear-facing windows were replaced, the glazing team began on the courthouse. With respect to these building occupants, the field crew removed and replaced an entire façade rather than a full floor. The onsite team sequenced the new windows from the northwest to the southwest, southeast to the northeast, wrapping around the structure. 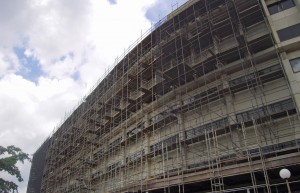 In addition to meeting the performance criteria, the window systems were designed to closely resemble the original, architectural character with narrow sightlines. Wausau’s aluminum frames were finished by Linetec in bronze anodize. “The goal was to satisfy the project requirements without increasing the existing sightlines,” states WASA/Studio A’s senior associate for preservation, Angel Ayón, LEED AP. “The project gained accolades due to the sensitive approach that it followed to minimize the impact of the window replacement on the significance of this modernist building.”

The resulting efforts earned praise from the Puerto Rico State Historic Preservation Office and the GSA. “In my opinion, Wausau did an excellent job designing and manufacturing windows,” notes Irina Danetz, M.S., engineer with the design and construction division of the GSA Public Buildings Service’s Northeast and Caribbean Region. “There was number of very specific requirements due to the nature of the building. For example, keeping the same profile as the existing windows, adjusting trims on every widow due to the size variations on each opening, full occupancy by the tenants with very demanding requirements, and blast and bullet resistance characteristics of the windows – in addition to the strict structural requirements. I will highly recommend their services to everyone.”

“Thankfully, there was no asbestos or lead that needed abatement, which is rare on a building of this type and age – something we are accustomed to seeing,” adds Feinn. He continues, “Wausau provided field support at critical moments, especially at the beginning. During the installation Hurricane Irene hit the Koch team causing damage to many uninstalled windows. Wausau helped us restore the inventory and with some excellent field management we stayed on schedule.”

Other storms during the period made for a challenging exterior installation. In August 2010, Hurricane Earl generated sustained wind speeds in San Juan of 29 knots with gusts up to 39 knots. The next year in August 2011, Tropical Storm Emily hit Puerto Rico, followed 20 days later by Hurricane Irene. Nineteen days after Irene, Tropical Storm Maria caused devastating flooding.

“We wrapped up on site in May 2012 and haven’t had a single call back. This was put to the test in August when Hurricane Isaac passed through. We did not hear of a leak or any issues associated with the windows’ performance,” Feinn says with pride.

My Home Remodel, Part 7: Let There Be Light