We’re all aware trends come and go but we probably don’t often think of trends in public restrooms. For example, baby changing stations were invented in 1985. Building managers resisted installing them because they figured it would be one more thing their cleaning crews would have to be responsible for. Then there was the cost to purchase them and, in some cases, it was difficult to find the space to install them. 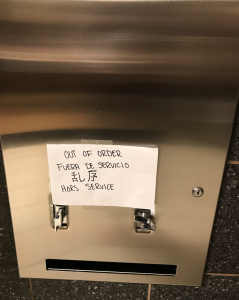 Unfortunately, feminine hygiene dispensers are being removed from ladies restrooms because they break down often.

But some retail and grocery stores started installing them and mothers were so pleased, other retailers took notice. Although baby changing stations still may not be found in some commercial office buildings, they are now widely accepted in other types of facilities and no longer just the territory of the ladies room.

Another fixture found in many ladies rooms, which were once considered standard, has recently been on the way out: feminine hygiene dispensers. Last year, Fast Company, a magazine catering to the high-tech industry, ran an article about a woman executive just about to hold a crucial meeting when she realized her period had arrived early.

She excused herself and went to the ladies room. Realizing she had no tampons in her purse, she looked for a feminine hygiene dispenser. There were none. The woman was able to make her presentation, but told the author of the article, “there’s not a woman that I’ve met that doesn’t have a story” similar to this one.

A parallel story is told by a woman attending the University of Nevada. In this case, the dispensers were installed in the ladies rooms but were not stocked. The female student decided to see if this is common on campus and, after checking 30 women’s restrooms, she found unstocked dispensers or no dispenser at all. She wrote the president of the university about the situation and received this reply from the maintenance department:

“We have enough product to stock the operational machines [but as for the future of the machines] we don’t know if this is even a service the University will want to provide in the future.”

Why Dispensers Are Being Removed

Unfortunately, feminine hygiene dispensers are being removed from ladies restrooms because they break down often. They also are vandalized and broken into for the few bucks deposited in the machine. When a machine is malfunctioning, for whatever reason, it has to be replaced. These dispensers typically cost $200 to more than $300 each.

Schools especially are cutting back wherever they can. Stocking feminine hygiene products means they must have the machines to dispense them, and many facility managers believe removing these dispensers and not purchasing supplies is a way to cut costs.

Unfortunately, these aren’t the main reasons these dispensers are being removed from restrooms. The following are:

Addressing the Big Reasons for No Dispensers

Manufacturers are trying to make purchasing, installing and stocking feminine hygiene dispensers more lucrative. One way they are doing this is to make them more tamper proof by removing all glass and having the entire unit covered with metal.

They are also making the “mechanicals” more dependable, durable and repairable. This way, the machines last longer and, should they break down, often only one or two parts need to be replaced, not the entire machine.

“Cleaning is another issue,” says Mike Watt with Avmor, a manufacturer of cleaning solutions and disinfectants. According to Watt, the following are the steps involved to clean a dispenser properly:

According to Watt, the cleaning step is designed to remove most soils, germs and bacteria from the surfaces of the dispenser. The disinfectant action kills germs and bacteria on the surface. “Although it is a two-step process, using the right solutions and disinfectants, the dispensers can be cleaned and disinfected in a few minutes, eliminating cleaning as a concern,” Watt says.

Will we start seeing more feminine hygiene dispensers installed in ladies restrooms in the future? Surprisingly, the answer is yes. More young women in schools and college are insisting on having them. In fact, in some schools, feminine hygiene products are dispensed at no charge.

Further, if the machines are more dependable and distributors find the dispensers and the supplies to be a revenue source, why not carry them? Odds are they have a future. As restrooms are updated, expect feminine hygiene dispensers to be installed.

Robert Kravitz is a frequent writer for the professional cleaning and building industries.