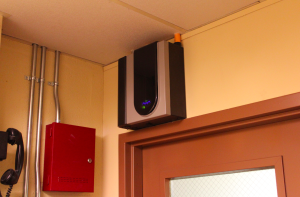 New York is one of an increasing number of municipalities across the U.S. that now require CO detection, in addition to fire detection, in newly constructed hotel guest rooms, as well as in other types of commercial sleeping occupancies. New York code requires an audible, in-room alert when either fire or CO is detected. The detector must also report to a panel that reports to a central station that is monitored 24/7, with fire and CO alerts being communicated independently.

The 4-Warn/CO detector is used with an addressable sounder base that sends those required in-room alerts, using separate, distinctive signals for fire and CO. In addition to meeting central station reporting requirements, this same combo detector saves on installation costs while providing a more aesthetically pleasing solution in comparison with using separate detectors.

New York was one of the first municipalities to adopt the new CO requirements for commercial buildings, added to the 2012 editions of International Building Code (IBC), International Fire Code (IFC) and NFPA 101: Life Safety Code. Geared toward newly constructed, commercial sleeping occupancies, these new codes can affect hotels, dormitories, apartment buildings, hospitals, daycare centers and nursing homes. As more regions adopt these newer code versions, demand for CO detectors that are cost-saving and code compliant is expected to increase rapidly. At the time of this release, all but 11 U.S. states have some type of CO detection legislation in-place.

To verify a true fire emergency, the 4-Warn/CO uses four sensing elements: smoke, CO, flame and heat. This measurement of multiple criteria has shown to significantly decrease nuisance alarms–a major challenge that is a common struggle for hotels and other lodging facilities.