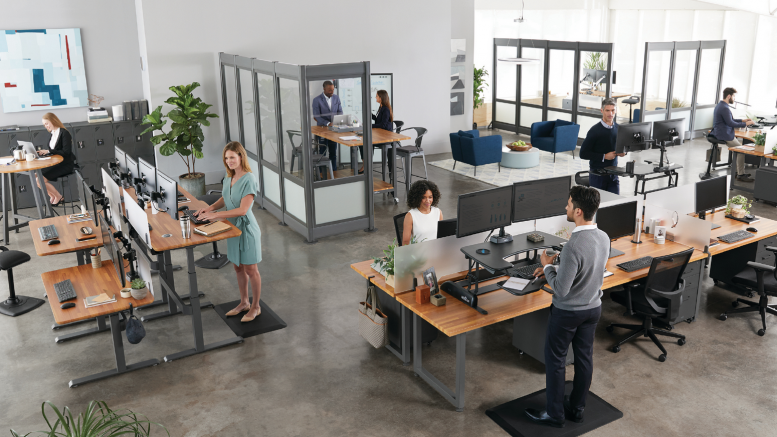 In the past, office and work-station design gave very little consideration to things like flow, function and employee productivity, activity and wellness. To many building owners, an office was just a place to house employees, and design was viewed in terms of how to fit the maximum number of desks, offices and cubicles into a given area or the aesthetic qualities of the furniture. Meanwhile, a desk was basically a table with some drawers in it and a chair shoved up to it. Until somewhat recently, few bothered to take a look at the real, bottom-line benefits that can come from having an office and work stations that maximize not just space or appearance, but also employee effectiveness, health and satisfaction.

“I would say that traditional workspace design over the years treated employee productivity and satisfaction as an afterthought,” recalls Will Martin, a senior director of real estate and facilities who has worked with numerous national and multinational corporations. “We’d use standard designs for the number of people based on offices or cubicles without consideration for workstyle or function. The facilities business has been managed as a cost for many years.” 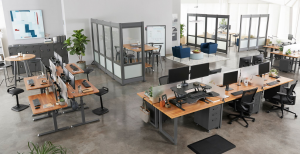 Smart business owners are beginning to see that office and workspace design is not just an expense, it is a tangible contributor to the bottom line.

Being seen as simply an expense on the balance sheet, office furniture often tended to be treated as a commodity. The goal wasn’t to apply the best solutions for the employees and the company. The goal simply was to choose something functional at the lowest cost or create a certain look. This results in the all-too-common practice of outfitting offices with outdated, inflexible or non-matching furniture.

Times are changing for many reasons. For one, with low levels of unemployment and talent in high demand, companies must offer an appealing space to encourage employee recruitment and retention. And perhaps even more importantly, smart business owners are beginning to see that office and workspace design is not just an expense, it is a tangible contributor to the bottom line.

“What’s changing in today’s environment is the fact that facilities managers are being seen as a potential value add,” Martin says. “It’s not just about getting the best price for a standard chair and desk. Culture and trends have pushed things in a new direction and executives are having conversations about the impact of furniture and workspace design on productivity, wellness and employee engagement. It’s an exciting time in the facilities business.”

Whether a workplace featured cubicles or offices, the overarching issue with the traditional office structure was rigidity. Cubicles came into fashion with the idea that they could offer greater ability to move and change. Not so, according to Martin.

“What I found was that building a cubicle is much like building a wall because the power and data cables run through it. And my staff can’t move or adjust it. Moving cubicle walls requires tearing them down and rebuilding them using manufacturer-trained technicians,” Martin explains. “The cubicle has improved over time, but furniture designers still never really fixed the fact that it is like an anchor and is too difficult to move or rearrange.”

This gets to the heart of where traditional office design conflicts with the realities of business today. Successful companies are the ones with the flexibility to grow, change and adapt. It can be difficult to do those things when employees and departments are locked into rigid, permanently defined spaces.

That rigidity begins at the individual workspace, which has long been defined by a traditional sitting desk, chair, cubicle walls and maybe some filing cabinets. Some variations in this basic dynamic got Martin thinking about even bigger changes. 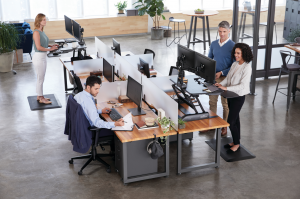 Any sit-stand desk provides flexibility to the employee using it. However, it is also important for any such solution to fit into the larger framework of the flexible office.

“I really got excited when people started asking for a standing desk,” he says. “The first couple of times we did it, we did it for executives and we spent a lot of money to rip out existing furniture and get a desk that could go up and down. We thought there had to be a better way and tested out a couple different solutions. One had a mount that didn’t work well with our furniture and another had a big pole right in front. We kept at it and finally found a solution that works for us in VARIDESK.”

Any sit-stand desk provides flexibility to the employee using it. However, it is also important for any such solution to fit into the larger framework of the flexible office. It should be simple, light, easy to install and able to adapt to a company’s changing space and needs.

“I was glad someone had figured out how to make this furniture work,” Martin says. “We now have a solution that is movable by my own staff and ideal for growing companies that may need to move or change entire departments or expand space.”

The move away from a rigid desk and cubicle design can provide many benefits in terms of productivity and employee satisfaction. (See “Stand and Deliver”, below.) Another benefit of rethinking traditional office design is that it creates new opportunities for activity and interaction. People move around and engage more in what has been described as an active office setting.

“I used some standing-height tables in the atrium near the deli in my building. I’ve personally experienced great interactions with people coming by,” Martin says. “The beauty of those tables is that when someone walks up, they aren’t towering over me. They can join the conversation at the same level. It makes it very comfortable and I’ve had some amazing business get done. We can have a quick five-minute conversation and solve something. You don’t get these kinds of interactions through email or scheduling on someone’s calendar.”

Martin wanted to apply some of these open, flexible concepts to other parts of his facility, but there were plenty of skeptics who still liked their walls and stationary desks. He needed a demonstration piece.


“When I explained the idea of collaborative space to people, almost everyone said it wouldn’t work for them,” Martin recalls. “I took about a quarter of one of my floors—approximately 6,000 square feet—and removed the furniture and hard-walled offices. I said ‘let me do something different and show you what I think collaborative means’. I put in VARIDESK sit-stand desks, LED lights, put some color in the carpet and opened up the space. It has been incredibly successful. People love it, and they want more of it.”

According to Martin, now that his collaborative space is up and being used, many staff members have commented they hadn’t realized how drab the previous space had been until using the new space. In addition, the quality of the space makes a real difference in how employees think, act and perform.

“I have a meeting with my team every month, and it has been held in our regular conference room since I’ve been here,” Martin says. “I held that same meeting in our collaborative space and it was the best meeting we’d ever had. It was the same group of people, same topic and same source of food. Nothing changed except the location. Everyone opened up, everyone felt more lively, and everyone stayed after the meeting. The old space was so uninviting that people didn’t want to stay. The new open meeting area is so inviting, people didn’t want to leave.”

The Way of the Future

Even with the success of flexible designs and the active office, there still is resistance to change in any organization. Traditional office design and furniture has a long history and, for some, change can be difficult or uncomfortable.

“The next step is to get more people to live permanently in an active, collaborative environment, but there still is often a belief that they can’t do it,” Martin says. “I recently took the cubicles out of my team’s space and put in new furniture, including standing desks. Some love it and some are adjusting. There can be a false sense of security with cubicle walls, even though they don’t really block sound.”

Martin believes that active work stations and flexible space are part of a journey to even greater freedom in the office. Technology allows many traditional employee tethers to be removed.

“My feeling is that, as an industry, we are on the path to what we call free addressing, where employees don’t necessarily have permanent space in the office,” Martin says. “I think it’s what we need, but a lot of people aren’t ready for it and feel they need their space with their name on it. But they are now starting to accept levels of change, like furniture that looks and behaves differently or glass walls or no walls.”

With a younger workforce more comfortable to flexibility and open collaboration, it’s pretty clear this is more than a passing fad. To retain top talent and maximize productivity, companies know this is the way to go. And as it comes into being, many will wonder why it ever was done any other way.

There is a great deal of research to show that standing, rather than sitting at a desk has tangible health benefits. It burns more calories and helps prevent back issues and other repetitive stress injuries common to office workers. But even beyond personal health, standing at a desk appears to boost employee productivity, as well. 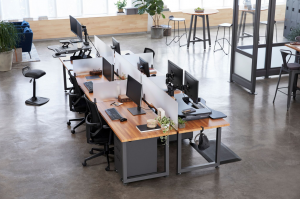 There is a great deal of research to show that standing, rather than sitting at a desk has tangible health benefits.

Results from a 2016 study by the Texas A&M Health Science Center School of Public Health show a 46 percent increase in productivity for employees at a call center who had sit-stand capabilities at their work stations. The study showed that after about a month of adjusting to the new work stations, employees demonstrated major increases in overall effectiveness each month in the six-month study.

In addition, 75 percent of those in the study reported decreased bodily discomfort when using sit-stand desks.

Repositioning a Historic Space to Appeal to the Best Young Talent