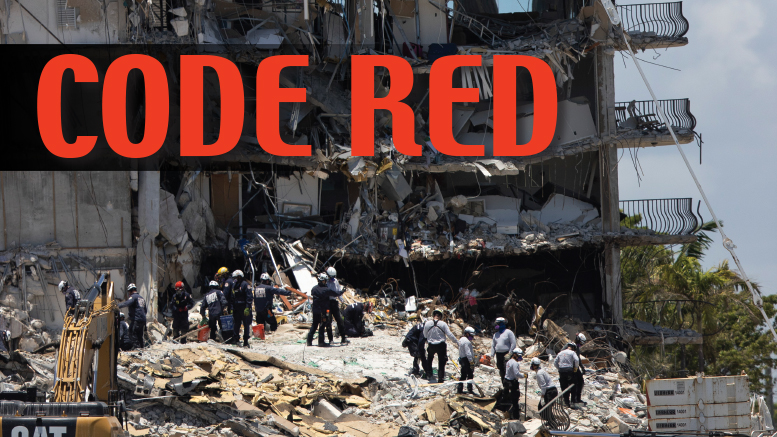 On Thursday, June 24, 2021, the Champlain Towers South—a 12-story condo building in the Miami suburb of Surfside, Fla.—suffered a catastrophic failure. The partial collapse of the building killed 98 people and injured many more.

Although the full causes of the collapse are still under investigation, the tragedy served as a stark reminder that buildings can be subject to degradation and failure over time. Structures and façades don’t just take care of themselves. They require inspection and maintenance. Postponing upkeep and ignoring issues can turn into literal recipe for disaster.

An event such as this motivates professionals across all disciplines to ask how this could have happened and discuss what can be done to make sure it doesn’t happen again.

“Some structural failures are obvious, triggered by an external event like a bomb blast, earthquake, hurricane or tornado,” explains Gary Mancini, managing principal with Thornton Tomasetti in New York. Mancini specializes in the investigation, renovation, repair and restoration of buildings. “But most failures are usually a combination of smaller, mundane issues that accumulate over time.

“Buildings don’t usually collapse, but too much deferred maintenance can create problems,” Mancini continues. “There are warning signs, such as cracks and spalls, that should not be ignored. Those are signals that the structure is experiencing wear and tear and you need to deal with those issues.”

“A lot of information is still coming out [about the Surfside collapse], but the clearly identified column-spalling issues, particularly in the pool pump room, was the canary in the coal mine,” says Nathan M. Gillette, AIA, LEED AP O+M, CEM, director of Natura Architectural Consulting in Grand Rapids, Mich., as well as a retrofit editorial advisor. “The structure was failing at an accelerated rate and there didn’t seem to be a sense of urgency to get it fixed.”

As the design and construction industry reckons with the severity of the Surfside event and starts to look around at the aging building stock in many cities, there has been much discussion about the roles maintenance and codes have to play in preventing future tragedies.

“This kind of occurrence was avoidable,” says Jared Blum, Washington counsel for the EPDM Roofing Association in Washington, D.C. “However, there are questions arising from so many issues, ranging from the structural weaknesses in the building materials and their use, to the slow follow-up by local inspection officials to the condo owners themselves, who failed to respond in a timely manner to the repair needs.”

“I equate it to going to the dentist. You go every six months for a cleaning and a checkup so you don’t have to get a root canal. If you avoid the dentist long enough, you end up with a more serious problem. It always pays to have regular inspections and intervention.”

In the wake of the Surfside collapse, many have questioned how our system of codes and inspections could have let something like this go unnoticed and unaddressed. The reality is that codes are a very complex, localized patchwork and by no means a perfect system or safety net.

“It’s important to remember that codes provide a minimum. They don’t necessarily give you the best or the optimum,” Mancini says. “For example, Florida code says you have to recertify a building after 40 years for structural integrity. That’s a long time. And it’s not to say that people don’t look at their buildings more frequently than that but, depending where you are in the country, it isn’t necessarily mandated.”

Codes often do evolve in a reactionary fashion, with events like Surfside creating initiative for change and improvement.

“Look at historic incidents, like the Cocoanut Grove fire in Boston in 1942,” Gillette says. “People couldn’t escape the burning building because they couldn’t work the revolving doors fast enough. That is why there is now a code requirement to have a swinging door next to the revolving door when it is used as a means of egress. It’s too early to know what will shake out of this incident, but there will be code changes because of it.”

“Our building codes and inspection policies should be designed to ensure that incidents like this collapse are avoidable,” Blum adds. “It’s essential that the public have confidence in the security of their homes and workplaces.”

But how much can codes do to help prevent failures like this? What kinds of changes could help? It is important to be informed by the past but focused on the future.

“One of the potential changes is revisiting inspection frequency and dialing back the time between them where it makes more sense,” Mancini says. “Building stocks in many cities are getting older, and older buildings are in need of more enhanced maintenance over time. Already we’re seeing, all over the country, local ordinances requiring more frequent inspections.”

Although codes could potentially offer some guidance and incentive to keep a closer eye on buildings with more regularity, there is still the difficult challenge of ensuring that proper maintenance is applied over the life of a building.

“There is a giant disconnect between what happens after the time a municipality issues a certificate of occupancy and during the time of occupancy,” Gillette says. “A code official will respond to a complaint about the building, but for the most part it’s reactive rather than proactive. A bank may require an owner to put replacement reserves aside to pay for future capital expense, but that is only for the life of the bank loan. Those reserves are not comprehensive and there may be enough money to pay for a roof replacement but nothing to address major structural issues.”

“The recent passage of landmark infrastructure legislation provides a good opportunity, as well as a major incentive, to review building codes and ensure that new construction meets standards that will protect the public,” Blum says. “In addition, the role of condo associations in governance, building maintenance and code compliance of large structures needs to be assessed. While condo owners are usually well meaning, it is clear that the financial reserve requirements for maintaining a multifamily residential structure and the expertise of people tasked with running that structure needs further regulation.”

“There are tools that might be helpful, such as implementing the International Property Maintenance Code in some areas,” Gillette says. IPMC is a model code from the International Code Council that regulates the minimum maintenance requirements for existing buildings. It is intended to protect public health, safety and welfare, while not unnecessarily increasing construction costs; not restricting the use of new materials, productions or methods of construction; and not giving preferential treatment to particular types or classes of materials, products or methods of construction.

“It’s not comprehensive, but it’s a start,” Gillette continues. “I would like to see something that ties all these dots together into a cohesive plan for maintaining a building over time. There’s no easy way to accomplish that, but small incremental steps will build momentum.”

“It comes down to finance, especially for condos,” Mancini says. “One thing that might come out of this is creating better funding mechanisms for ongoing repairs and maintenance, maybe a government fund that associations can borrow from at a low interest rate. The financial barriers need to be lowered. That is one of the biggest issues to overcome.”

Along with prescriptive changes in codes and rethinking how we conduct upkeep of structures already built, an event like the Surfside condo collapse also provides an opportunity to rethink and improve how we construct and maintain buildings in the first place.

“I think we’ll see more aggressive standards for specifying concrete construction in aggressive environments,” Mancini says. “That might include concrete strength, air entrainment, rebar cover, or anything else that can potentially lead to premature deterioration and failure. There will be heightened standards for new construction, as well as for repairs and renovations.”

“We need to look back at the construction practices encouraged by regulations promoted in 1980. Much has been written about the fact that, due to tax incentives at that time, there was an explosion of construction that was not always quality-controlled,” Blum says. “As much as 80 percent of premature building wear expenses are related to moisture in one way or another. Water is the most significant factor in the premature deterioration of buildings.”

Whether on the inspection and maintenance side or on the construction side, addressing the integrity of our buildings comes down to a change in mindset. There can be a tendency to ignore issues or wait for someone else to deal with them later. A more proactive approach can save money and lives in the long run.

“The wishlist for me would include more frequent inspections. And there is technology to help with that, like drones and even the use of AI to supplement the engineer’s own eyes in identifying problems,” Mancini says. “I equate it to going to the dentist. You go every six months for a cleaning and checkup so you don’t have to get a root canal. If you avoid the dentist long enough, you end up with a more serious problem. It always pays to have regular inspections and intervention.”

NIBS Issues Interim Report on the Benefits of Hazard Mitigation