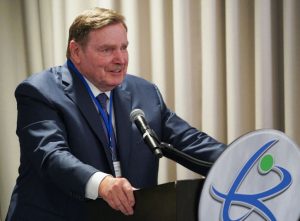 Peter Thornton, Sr. is honored with a Lifetime Achievement award.

When LIGHTFAIR International returned to Chicago for the first time since 1995, it marked a special occasion for Focal Point. The hometown architectural lighting manufacturer had opened for business the previous year; therefore it was different this time. New products, line extensions and human-centric technologies combined to attract crowds to its booth at McCormick Place.

A historic moment for Foal Point occurred when Peter Thornton, Sr. was recognized with an industry Lifetime Achievement Award from the Edison Report. The company’s patriarch thanked his wife Marijane and five children, in addition to his agents for helping Focal Point become the company it is today. Mr. Thornton recalled the early days when the company first started and discussed some of the challenges that are unique to the lighting industry.

“My father’s award kicked off a rewarding next three days. We have come a long way since 1994, and it was great to see how many people visited the booth,” comments Mike Thornton, chief marketing officer.

“Heading into the show, we expected there would be interest. The Bringing It All To Light theme was geared to generate awareness around our products and technologies, and our vertical integration, which allows us to support the process from specification to installation.”

The series of new products were a hit, some of which were on display for the first time and others that have yet to be introduced to the market. This included extensions to product lines such as Skydome Edge, the ID+ Cylinders, as well as the Seem 1 line, including a suspension with lit endcaps and another one with point sources.

Thornton said he received praise for several products that promote well-being. Skydome Edge, which features a low-profile housing, a regressed lens, and a knife edge, also offers an acoustic companion, in pendant and surface mount options.

The ID+ 3.5- and 4.5-inch cylinder series also proved popular at LIGHTFAIR. Companion pieces to the ID+ Downlights, they offer a one-piece, die-cast reflector with a knife edge and a decorative reveal with a dual purpose: it serves as a heat vent while enhancing the aesthetic.

Thornton mentioned the Seem 1 Acoustic linear luminaire and baffle system attracted attention for its ability to be specified with direct, indirect, or indirect/direct light distributions, or as an unlit acoustic baffle. Designed for multi-purpose areas, the linear LED luminaire offers a housing made of an eco-friendly and sound absorbing material.

“Gone are the days,” Thornton summarizes, “where lighting designers had to drop mismatched linear light fixtures or cylinders between baffles. Or they were having a difficult time specifying a space, let alone making sure the delivery would be synced and the installation done correctly.”

In conclusion, he adds, “Focal Point proposes ways to ensure both visual and acoustical comfort for open spaces. Featuring our AirCore technology, the construction increases the Noise Reduction Coefficient (NRC) of the luminaires and baffles.”

Be the first to comment on "Focal Point Rolls Out New Products, Patriarch Earns Award at LIGHTFAIR International 2018"