While he served as volunteer chair of Indianapolis-based Indiana Landmarks, John Watson was aware of many statewide historic buildings that had reached the end of their useful life and were in need of protection. Among those projects was Bush Stadium, which was built in 1931 and was home of the minor league Indianapolis Indians until 1996 when a new stadium was built for the team. Bush Stadium, which was added to the National Register of Historic Places in 1995, began appearing on Indiana Landmarks’ “10 Most Endangered” list and would continue this infamous appearance for nearly a decade. 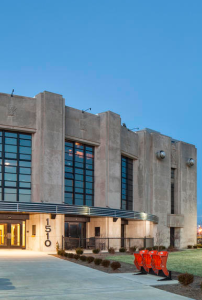 At the main entrance on the building’s southwest corner, residents still experience what it’s like to walk into the stadium because Watson and his team maintained the concrete risers that supported the seating in that area. PHOTO: Josh Beeman Photography

During those years, Watson sketched a vision of constructing apartments where the stadium’s seats were within its original façade and roof. It was a unique idea, but Watson had spent 30 years as an apartment developer, and his business Core Redevelopment, Indianapolis, which specializes in adaptive reuse, historic-tax-credit projects and redeveloping underutilized multifamily assets, assured him it could be done.

In 2011, the city of Indianapolis planned a vote that would likely result in tearing down Bush Stadium. Watson and his colleagues at Indiana Landmarks attended the meeting and presented his sketches. Surprisingly, city representatives asked how long Watson needed to determine whether creating housing within the stadium was feasible. He asked for 90 days.

During that time period, Core Redevelopment hired an engineer and architect and found the construction aspects were indeed feasible. However, the project’s location on the fringe of downtown meant rents were not high enough to justify the project cost. Total sources were short of Watson’s total project costs by $3.5 million dollars. (The initial budget was $12.3 million. The final cost of the project actually was slightly less.)

In addition, in Watson’s original sources, he assumed historic tax credits would provide $1.8 million toward the project costs. The Washington, D.C.-based National Parks Service, the arbiter of the tax-credit program, made the determination that the project was ineligible for tax credits because of the conversion of an open-air building to an enclosed structure. 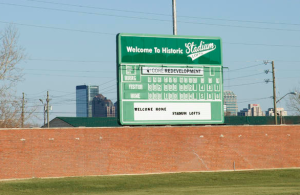 Developer John Watson sketched a vision of constructing apartments where Bush Stadium’s seats were within its original façade and roof. It was essentially what he built. PHOTO: Josh Beeman Photography

“We went back to the city and said we had financial gaps on the project,” Watson recalls. “I thought that basically gave them the political cover to tear it down, but they surprised us by saying the city would cover the gap. After that, we went forward based on those preliminary sketches and that’s basically what we built.”

Little did Watson know that when the city agreed to help fund what was now known as Stadium Lofts, city leaders anticipated it would form the western edge of a future technology park spanning 170 acres. Designated as 16 Tech, the area has a number of developed properties already contributing to the business community, and Indianapolis hopes to entice advanced manufacturing businesses, clean technologies, pharmaceuticals and more to the area.

“The city’s idea was if we did a big rehab project of the stadium, which was kind of out on the fringe of this park, people would feel better about investing in infill projects behind it,” Watson says.