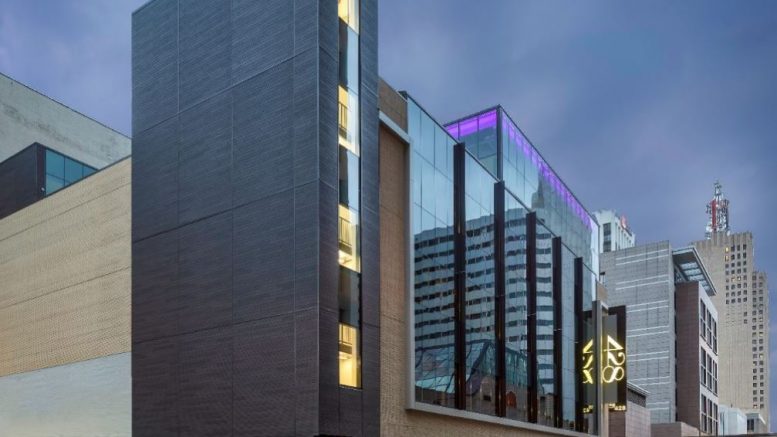 For more than 70 years, the Woolworth Building defined the northeast corner of 7th Place and Minnesota Street in downtown St. Paul, Minn. For the last 30 of those years, it sat abandoned and neglected.

In 2015, when Woolworth’s lease finally expired, a new chapter began to be imagined for this downtown landmark. St. Paul-based HFS Properties and Commercial Real Estate Services Inc., the longtime property owner and developer—recognizing that the building had great bones—embraced the opportunity to invest in a repurposed life for the structure as a contemporary office building. In fact, it would be the first speculative office development project to come online in downtown St. Paul in five years. Although the city had struggled with rising vacancy rates, what would become The 428—appropriately named for its address— was designed to help reverse that trend by providing modern, appealing office space for companies, especially those in the tech and marketing fields.

But the developer didn’t want to create just any ordinary office building. Understanding that in life—and in business—every day counts, HFS Properties and Commercial Real Estate Services sought to create a building that brings together wellness and environmental elements that are proven to create healthier, happier people who are more engaged and productive at work.

AFTER PHOTOS: Kirk Monpas and BEFORE PHOTOS: HDR

To get there, the team first had to deal with a building in major disrepair: The roof structure was compromised; the second floor was windowless; the sidewalks were becoming a hazard; the canopy on the south and west façades was slowly disintegrating; and the HVAC system faced complete replacement because it was original to the building. The developer brought HDR’s Minneapolis office on board to modernize the concrete and steel building. The design team proposed three big ideas it knew would modernize the building and give it a new lease on life:

SLICE: The exterior brick on the south and west façades was removed and replaced with glass curtainwall, allowing natural light to enter deep into the tenant spaces in the building’s core and maximizing views to the outdoors. From the outside, the transparency of the glass façade provides a glimpse of the engaging spaces within. (A Husqvarna DXR-140 giant wheeled claw-hammer robot was used to remove the exterior walls.)

BOOKENDS: To solve the need for vertical transportation, the team created two corner elements that frame new exterior curtainwalls. These Bookends illustrate the flow of movement through the space before even entering the building and also make the transition between the new modern façade and the classical revival style of its neighbor, the Golden Rule Building.

CORNER CUBE: A dramatic, 6,000-square-foot glass cube on the fifth-floor rooftop distinguishes this office building from all others. Designed to house a collaborative co-working space, called Wellworth, it’s an alternative to traditional office spaces on the floors below. The Cube is flanked by patio spaces to the north and south. All tenants can use these patios to take work outside or lease additional seats from Wellworth to round out tenant spaces below.

The 428 is paving the way for today’s workforce into a future focused on the physical and mental health of its occupants. To accomplish that, owners established a new standard for occupancy health and wellness in a speculative office building. In addition to seeking a LEED rating, the decision was made to also embrace WELL Building Standard certification, which emphasizes the health impacts of the built environment on the people who live and work in buildings. It was the first building in the state to seek both, and it has subsequently met WELL Gold guidelines for healthy buildings and LEED Silver certification.

INSPIRED BY ITS LEGACY

Inspired by the building’s 1950s mid-century modern design, the team took cues from existing architectural elements. Exterior brick was selected to match the existing colors and set the primary color palette for the exterior. The distinctive metal panel “brows” that make the canopy and wrap the windows on the third floor were reinterpreted to wrap new curtainwall windows and form the edge of the new street-level canopy.

A contemporary interpretation of the ornate mid-century modern handrail found at the customer stair between the existing first and second floor was installed into the stair railings from the basement to the second floor. Woolworth’s first-floor lunch counter was torn out and reinstalled in the building—about 50 feet from its original location—as the centerpiece of a new café. A terrazzo floor found during demolition now graces an entry floor.

All lighting is LED, including the crown of the glass Cube, to meet energy-use requirements. A large portion of the material removed from the building was recycled, including the light fixtures found in the women’s breakroom on the third floor. These were removed, reconditioned and installed in an entry vestibule.

THE FUTURE OF WELLNESS AT WORK

The 428 is the first building in the seven-state region to be awarded WELL certification at the Gold Level. One key element of the WELL certification— encouraging tenants’ physical activity—drove the location of the south stair from behind a closed door to front and center, encouraging tenants to take the stairs over the elevators. The stair enclosure was designed to extend to the exterior of the building, creating the lobby for the building. Earth-themed graphic elements and artwork, along with colored precast concrete treads, further encourage the use of the stairs.

Among other WELL-inspired features are re-filtered city water (to remove chemicals, such as fluoride), heat-reflecting glass, indoor lighting that adjusts to natural light and sophisticated air filtering. Other improvements include providing new egress stair towers, new elevators, tenant toilets, and new HVAC and MEP systems. The building is also equipped with bicycle storage and showers to encourage active transit.

Since opening, The 428 has hosted numerous local and professional events. Its attractive spaces and convenient location make it ideal for a wide variety of get-togethers. In the past few months alone, it has been part of the walking tour for Minnesota Commercial Real Estate Women and hosted a meeting for the local NAIOP chapter, as well as greeted U.S. Green Building Council Leadership for the building’s LEED plaque ceremony. Recent events in the Wellworth space have ranged from seminars about topics, such as Google analytics and storytelling to yoga on the patio and organizational networking events.

With a Walk Score of 92, tenants can step out of the office and are close to parks, museums, theaters, sporting events, concerts, fine dining, specialty food, brewpubs and more. This forgotten corner is derelict no longer. Today, The 428 is a progressive and vibrant professional space that has embraced the future while honoring its past.