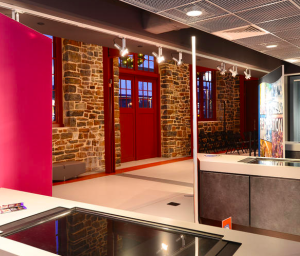 A compatible mortar of hydraulic lime was used in repointing the building’s interior and exterior.

Windows proved to be another challenge. When the project began, the stock house had three salvageable existing windows that were 10-feet wide and 21-feet tall. Based on the building’s existing drawings, there were 21 openings that had to be recreated. Allegheny Restoration and Builders Inc., Morgantown, W.Va., was hired to refurbish the windows and doors.

According to Blair Lee, Allegheny Restoration and Builders’ president, the three salvaged windows’ frames were basically scrap lumber. “Our team of 12 took the original frames and copied the components and built new jambs for the three windows we could restore,” Lee says. “We were able to take 50 percent of the sashes and make replacement parts and epoxy and recondition them. We were even able to save some of the original glass.”

By matching the details of the three salvaged windows, the team was able to fabricate identical new windows with clear, restoration glass in approximately four months. A three-person crew from Allegheny Restoration & Builders then spent three months onsite installing the windows.

Modernizing a former stock house that was never meant for people made this one of the more challenging projects the design team has encountered. “We had all these drawings to sort and read through, but some only had half information and we had to come up with details and make things that weren’t originally supposed to be there work in the context/framework of this existing building,” DeLong explains.

“I think that’s one of the biggest challenges you face in any existing building,” Schell adds. “There are obviously significant changes that have occurred in the air-conditioning and heating world since 1863, including new energy-code requirements. You must know the requirements and meld them into an existing building that was never constructed to house all of that while making the building look as it did in 1863. Every decision we made as far as a finished product mattered.” 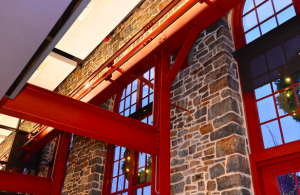 The building was out of square by several inches, and the existing steel trusses—which were left exposed in the building— weren’t necessarily placed in a uniform manner from one end of the building to the other.

But the rewards outweighed the challenges. The completed building is not only special to the design and construction team, but it also has great meaning to Bethlehem and the Lehigh Valley.

“This is by far one of the finest examples of historic restoration that I’ve ever been involved with,” Hanna notes. “I don’t think I’ve ever done a project that was this dramatic in terms of before and after. It was an amazing transformation. USA did a phenomenal job on design. Their consultants and the contractors made up a great team. I’m very proud of the finished product.”

Schell adds: “Pennsylvania has a lot of industrial cities that have fallen on hard times because of the changes in the overall economic model from industry to service. A lot of these towns are searching for new identities, and the resurgence of Bethlehem, which is becoming viable again, is so nice to see. It was nice to be a part of this project for Bethlehem.” 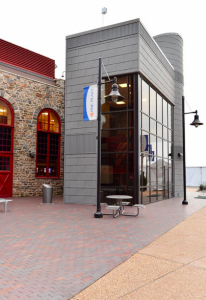 A zinc-clad addition houses an elevator and stairway. Metal was chosen for the exterior to connect to the blast furnaces behind the stock house.