Jason Roberts is a regular guy. He is an IT consultant who lives in the Oak Cliff neighborhood of Dallas. Oak Cliff had never been considered the nice part of town. Around 2005, at the age of 32, he got an urge to fix a few things in his neighborhood. Thanks to rapid distribution by social media, Roberts’ simple desire to make Oak Cliff a better place to live has morphed into a national program Roberts co-founded with Andrew Howard called The Better Block.

The Better Block works with residents, developers, community leaders and others to revitalize blighted neighborhood blocks across the U.S. With the help of volunteers known as Team Better Block, Roberts and Howard create pop-up shops and organize events to generate interest in helping neglected blocks again contribute to a city’s economy.

So far, Team Better Block has completed 28 projects and has many more on the boards. It has been the instigator for revitalization of communities in Colorado, Kansas, Maryland, Missouri, Mississippi, Nevada, New York, Ohio, Oklahoma, Pennsylvania, Tennessee and Texas. The Better Block has generated interest from locals and celebrities alike. For example, singer/songwriter Billy Joel participated in The Better Block project in New York.

retrofit had the chance to speak with Roberts to better understand his motivation and learn how retrofitting neglected buildings can create commerce in communities that need a helping hand. 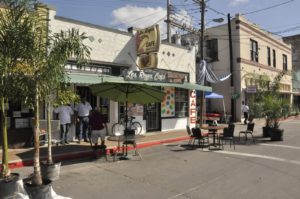 r: What motivated you to tackle your first block project?

Roberts: Revitalizing city blocks had been in the back of my mind for a long time. I am in a rock band and we perform around Texas—sometimes in the not-so-good parts of town. I’d always wondered why these places were kind of dilapidated and were now the bad parts of town. When I was researching my neighborhood, I found our dilapidated blocks were on the old streetcar line and things had been done to make the blocks less pedestrian-friendly: streets were widened, sidewalks were taken out. All the great blocks around the world have pretty much the exact same ingredients: a coffee shop, restaurant, flower shop, bakery, art gallery, outdoor seating and bike lanes. I decided we needed to bring those ingredients to each neglected block.

r: As you began researching your first Oak Cliff block improvement, was there anything that stood in your way?

Roberts: One of my good friends is an urban planning buff. He and I realized it costs $1,000 to add sidewalk flowers and another $1,000 times area market value, etc., to do outdoor café seating. There were a lot of rules like this on the books since 1941. It’s difficult to raise $50,000 if you’re a small entrepreneur, so imagine how much it cuts into your budget to try to add amenities that attract people and help them linger. Businesses would question them, but one business couldn’t do anything about the rules so nobody got anywhere. 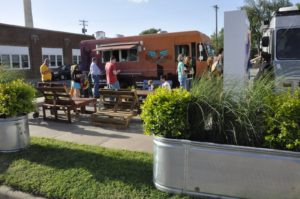 We decided to see how many rules we could break in one weekend with our project. I also realized it would be really powerful to post all the rules we were breaking for everyone to see. For example, one of Oak Cliff’s rules didn’t allow you to sell merchandise on the sidewalk. I created posters of great cities with photos of fruit stands and bookstalls on the sidewalk and would explain our ordinances don’t allow us to do those things. It was amazing to see people in the neighborhood read the ordinances and shake their heads. People really got it and were a little angry; anger helps motivate people to effect change.

Ironically, my friend the urban-planning buff was elected to the city council after this first project. He has been on the council now for a year and a half and has spent the entire time rolling back ordinances that impede better blocks.

Be the first to comment on "Fortune Favors the Bold"