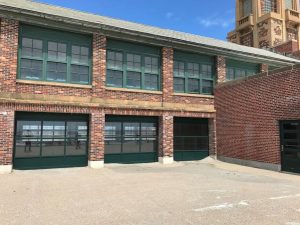 Renovations at the Riis Park Bathhouse called for elements of flow-through design, including roll-up doors, to make the historic property more resilient to future storms.

Listed on the National Register of Historic Places in 1981, Jacob Riis Park Historic District has seen its ups and downs over the years. Opened in 1932 as the People’s Beach, the oceanfront attraction was renovated in 1937, and then closed down for many years. Thanks to a renewed refurbishing effort, the main feature of the park, an Art Deco styled bathhouse, is now welcoming guests again.

After being acquired by the National Park Service in 1972 as part of Gateway National Recreation Area, the Rockaway, N.Y., beachside property was infused with $20 million in restoration efforts. However, the funds dried up part way through the project and the bathhouse renovation was abandoned. Boarded up and covered by sand dunes, and Hurricanes Irene and Sandy further devastated the structure with storm surge bursting through the brick building.

In 2015 the government stepped in again with an effort to rehabilitate the Riis Park Bathhouse. The new design called for elements of flow-through design, including roll-up doors, to make the historic property more resilient to future storm surges and expected sea-level rise.

LEE Construction Group Inc., the general contractor for the project, has had its hands full working on the renovation of the bathhouse. When the project architect called for 25 stainless steel garage doors for the structure, the company had to get involved in finding alternative products.

“The idea was to have roll-up garage doors that would protect the structure on a daily basis while also allowing sea waters to flow through the building if needed during a severe weather event,” says Stan Hall, business development manager with LEE Construction Group Inc. “Unfortunately the roll-up stainless steel doors were over budget. We did some research and discovered that aluminum garage doors from Haas Door were a close match. The doors were economically priced for the project.

“After gaining approval on the garage doors from the National Park Service, we worked through a lot of design issues with both Haas Door and New Jersey Door Works. The flexibility of both companies made it possible to have these doors installed on the bathhouse.” 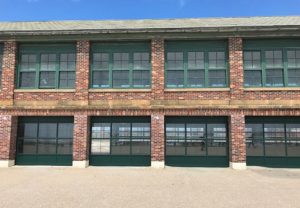 Aluminum garage doors from Haas Door are retrofit into all of the openings of the historic structure.

New Jersey Door Works, headquartered in Union, N.J., specializes in commercial projects. For the past 10 years they’ve worked with Haas Door and believed that its products would be a good match for the bathhouse project.

While the front of the bathhouse structure was originally created of aluminum and glass store fronts, it was decided to retrofit garage doors into all the openings. This provides the ability to better protect the structure from vandalism and storms.

“There were multiple revisions to the shop drawings for this project,” says Tom Szarszewski, general manager with New Jersey Door Works. “Because this was a historical restoration project, the National Park Service had high standards on the products used.

“Our team was dedicated to getting the job done the right way, so we worked carefully with everyone involved. On an almost daily basis we were in touch with the Haas Door experts to assure all aspects of the doors met the expectations of the National Park Service.”

On the manufacturing line in Ohio, Haas Door worked to assure the 25 garage doors met the exacting needs of the project. A custom green paint color, Hartford Green, was created to replicate the original bathhouse structure. Fourteen of the doors include custom insulated glass with ¾-inch Hartford Green mutins concealed inside glass units. Eleven of the doors have ¼-inch clear tempered glass with solid aluminum panels painted in the Hartford Green in the bottom two and top sections.

“This was a project we fully embraced,” says Joel Yackee, regional sales manager for Haas Door. “Our CA-220 Commercial Aluminum doors were selected based on their frames and durability. These garage doors are made to withstand whatever Mother Nature will throw at them in the future.

“In addition to the 25 complete doors, we also provided nine sections only doors to mimic the operating doors. These are also the CA-220 doors in the custom color. All of these doors include custom insulated glass with ¾-inch wide Hartford Green mutins. The mutins are concealed inside the glass units with solid aluminum panels custom painted in the Hartford Green in the bottom sections.

“To finish out the project, there are 14 transom sections that consist of one CA-220 top section with solid smooth aluminum panels painted Hartford Green. These lower the opening and allow room for the torsion assembly.” 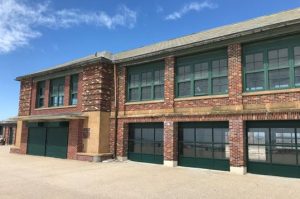 The end result of the restoration project is a revitalized bathhouse and project site. In March the National Park Service announced the signing of a Letter of Intent (LOI) with Brooklyn Bazaar for the Jacob Riis Park Bathhouse.

A long-term lease negotiation is underway between the two parties. Since 2015 Brooklyn Bazaar has hosted activities, provided entertainment, shopping, food and drinks at the waterfront area. Weekend pop-up markets and restaurants brought to the site by Brooklyn Bazaar during the restoration have helped attendance at the park triple in the past few years.

According to the National Park Service, Brooklyn Bazaar proposes to develop the Bathhouse Complex into a seaside destination, returning Riis Park to the People’s Beach from decades past. The proposed changes will culminate in the summer of 2020.

One of the ten most visited national parks in the country, Gateway National Recreational Area spans two states and offers activities for everyone. From visiting the oldest lighthouse in the nation to camping and swimming, the New York metropolitan area facility offers an abundance of leisure options. Now, with the enhancements to Riis Park and the bathhouse, future generations will also have the opportunity to enjoy the beauty of the area.

Haas Door is located in Wauseon, Ohio, where the company manufactures steel and aluminum residential and commercial garage doors. The family-owned company holds memberships in IDA and DASMA, and produces products that are sold throughout North America.