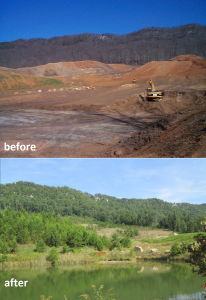 General Shale has been recognized by the commonwealth of Virginia for exceptional reclamation efforts at a former excavation site. The company was awarded the state’s top reclamation honor for 2015, given jointly by the Virginia Department of Mines, Minerals and Energy’s Division of Mineral Mining (DMM) and the Virginia Transportation Construction Alliance (VTCA).

The award was given in recognition of General Shale’s long-term, exemplary reclamation work at its Yuma location, and was presented at VTCA’s annual meeting in Hot Springs.

In addition, this reclamation project will be nominated by the commonwealth of Virginia for a national award through the Interstate Mining Compact Commission’s (IMCC) Reclamation Awards Program for 2015, to be awarded in April 2016. In the 28-year history of IMCC’s awards program, no brick manufacturing company has ever received the national award for reclamation efforts.

Headquartered in Johnson City, Tenn., General Shale is the North American subsidiary of Wienerberger AG and a manufacturer of brick, one of the world’s oldest green building materials.

“Sustainability and environmental stewardship have always been a priority at General Shale, and we are proud of our award-winning reclamation record,” says Charles Smith, president and CEO of General Shale. “We work hard to ensure that the areas we reclaim at our excavation sites look as good as or better than they did before we began our operations, and this award validates our stringent efforts to uphold that commitment.”

General Shale began mining operations at the Yuma site, located in Scott County, in 1999. The company first initiated reclamation activities as early as 2002 as the shale was exhausted in various portions of the site, and continued to reclaim areas of the property throughout its active mining stage and its post-operative years. In total, General Shale has reclaimed all 74 acres at the location.

General Shale entered into an agreement with the Virginia Department of Forestry to plant approximately 15,000 tree seedlings over nearly 30 acres, which now serve as forestland for wildlife. In addition, General Shale converted approximately four acres to a wetland, while an estimated 40 acres were restored as grassland. To date, the company has invested more than $200,000 in reclamation efforts at the site.

“The reclamation General Shale has accomplished at the Yuma site ensures the long-term stability of the location,” says McDonald Hagy, mine inspector at the Virginia Department of Mines, Minerals and Energy. “In addition to employing several post-mine land uses, General Shale worked diligently and used several techniques to ensure water quality discharging from the site would meet pH standards over the long term. The company has gone to extraordinary efforts to restore the area to a well-vegetated, stable state.”

This marks the second time in the past several years that General Shale has received an award from the DMM and VTCA for a reclamation project. In 2009, a reclamation program for the company’s former Somerset plant site, located northeast of Charlottesville, earned honorable mention. That project resulted in the restoration of approximately 95 acres for pastureland use or hay production, along with a 13-acre wetland for wildlife.

The Virginia Department of Mines, Minerals and Energy is responsible for ensuring the reclamation of land affected by mineral mining activity. The department’s Division of Mineral Mining and the Virginia Transportation Construction Alliance jointly sponsor an annual mined land reclamation awards program. Mine operations that have performed exemplary or innovative reclamation of lands previously disturbed by mining are nominated by their respective mine inspectors for awards in quarry and non-quarry categories. Operations that win the overall state award advance to compete with mining operations from other states for national awards. Virginia mining operations have been awarded numerous national reclamation awards.