In the late 1940s, 28 year-old Ed Malzahn applied a combination of knowledge from his father’s blacksmith business and his degree in mechanical engineering to produce a machine that would revolutionize the underground construction industry as we know it today. At the time, Mazlahn was paving the way for compact trenchers that now efficiently install water, sewer and gas lines and telecommunications, CATV and fiber-optic cables across the globe. Malzahn’s original DWP launched a more than 60-year history for Perry, Okla.-based The Charles Machine Works Inc. (CMW), as well as its leadership in manufacturing Ditch Witch-branded equipment used in construction projects worldwide. 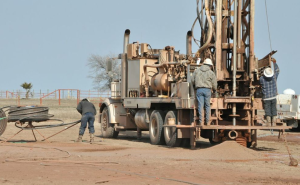 True to its longstanding reputation for innovating utility construction solutions, CMW has recently developed horizontal directional drilling equipment, which is being used in the growing geothermal industry.

True to its longstanding reputation for innovating cutting-edge utility construction solutions, CMW has recently developed horizontal directional drilling (HDD) equipment, which is being used in the growing geothermal industry. Rising fuel costs and an elevated interest in renewable energy technologies have made geothermal heating and cooling a more popular HVAC industry choice in recent years.

“As a company, we’ve made a living out of serving the underground construction industry, and to stay on top of the latest trends and understand the newest innovations, we figure there isn’t a better way than to install them at our own facilities,” says Tony Guinn, plant engineer for CMW. According to Guinn, he and others at the company initially familiarized themselves with geothermal system concepts via relationships with nearby Oklahoma State University, where the International Ground Source Heat Pump Association (IGSHPA) is headquartered. 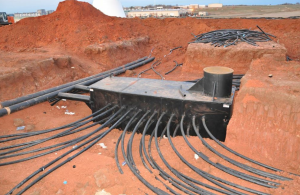 “As part of an overall assessment of how we could make our product development center more energy efficient, and ultimately shave a considerable amount of operating costs, we knew some significant HVAC upgrades would be in order,” Guinn notes. “We were doing a lot of work to improve the building envelope performance, including replacing the floor-to-ceiling window walls, which make up the entire south-facing side of the building, with low-E glass.”

Darrell Stolhand of Stolhand Heating & Air Conditioning agreed with specifying the new SHC onDEMAND units from ClimaCool for several reasons. “The project goal was to save money, and a system like this that can blend energy versus just blast heat or cool seemed like the way to get that job done,” he says. “Also, the comfort level of this type of system is exceptional, especially when considering the design of the building, which includes two levels of an open floor plan and a south-facing wall made entirely of windows.” According to Stolhand, the SHC onDEMAND units’ ability to allow any module to be indexed for heating or cooling regardless of its position in the bank, providing optimum module/compressor run time equalization, was also viewed as a significant benefit.

Each of the three, six-pipe ClimaCool SHC onDEMAND units also feature a modular design with built-in redundancy with separate module electrical feeds and dual independent refrigeration circuits, allowing for the unit to maintain operation while individual modules are being serviced. “This is an advantage as it means there’s no down time in the facility when maintenance or other system adjustments are necessary,” Stolhand adds. 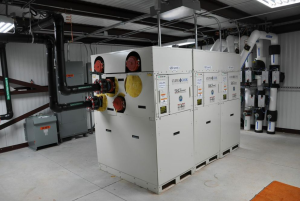 Each of the three, six-pipe ClimaCool SHC onDEMAND units also feature a modular design with built-in redundancy with separate module electrical feeds and dual independent refrigeration circuits, allowing for the unit to maintain operation while individual modules are being serviced.

According to Darrin Beller, president of Air Products Supply, this ClimaCool configuration incorporates several notable features that maintain precise chilled and hot water temperatures, building loads and compressor run time equalization for ultimate operational efficiency. “Features such as the CoolLogic Control System and integral motorized valves for variable pumping can result in cooling efficiencies up to 25 EER and heating efficiencies up to 5 COP,” Beller says. “This opens a lot of doors for us in supplying to projects that demand a high level of energy efficiency, including sustainable building projects, and the flexible nature of the system means it can be integrated with cooling towers, geothermal loops or hybrid systems.”

The SHC onDEMAND unit was specified as part of a new 150-ton system at CMW’s product development center that would also incorporate two existing air handlers with replacement Wilo brushless DC motorized pumps for load demand sensing. The controls system and fresh air vents with an economizer, considered state-of-the art when originally installed in 1978, would also be replaced with a web-based building automation system (BAS).

“The new BAS provides much more control than the previous system and really brought mechanical operations to a whole new level in the building,” says Mark Furgason, sales and service manager at Automated Building Systems, which designed and installed the BAS.

According to Furgason, the system includes a graphical floor plan of the building that shows all zones and readings from their associated temperature sensors. It allows Guinn and others at CMW to monitor temperature in real time, as well as easily make any necessary adjustments. “The system allows you to adjust operations either onsite or remotely from any web-based device, including a computer or smart phone, and can also send alerts about system operation changes or problems directly to Tony via email or text,” Furgason explains. 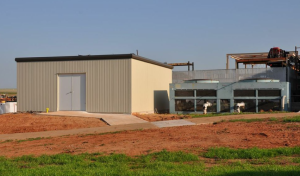 The drilling was conducted in tandem with the construction of a separate foam-insulated 20- by 24-foot mechanical building that would house the new ClimaCool units and ancillary HVAC system equipment.

Initial geothermal field drilling for the project began in September of 2011 simultaneous to digging for new French drains on the north side of the product development center building. “This was our first vertical loop field geothermal project on the campus,” Guinn says. In all, the field includes 168 400-foot-deep boreholes with HDPE double U-bend pipe installed throughout.

The drilling was conducted in tandem with the construction of a separate foam-insulated 20- by 24-foot mechanical building that would house the new ClimaCool units and ancillary HVAC system equipment. “With our original HVAC system, the chiller was external to the building and the boiler, which we removed, had been installed in the shop,” Guinn says. “We really needed a separate space for the new equipment, and also had a goal of making it a showplace of sorts, to use as a model for how this innovative system looks and operates.” According to Guinn, the building’s dual steel wall construction was designed to be highly energy efficient, as well as provide a clean, finished look for those visiting the space. 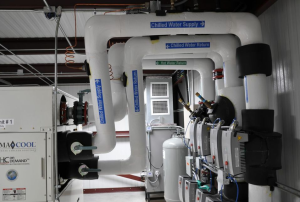 In addition, an underground vault made of waterproof polyethylene was constructed to house the geothermal ground loop manifolding system.

Upon completion of the loop field in March of 2012, the ClimaCool unit was installed and initial flow testing was conducted. “After the commissioning phase, the ClimaCool system has performed very well,” Guinn says. “We locked the thermostats at 73 F to eliminate user fluctuations during last summer’s heat wave, and the system kept the building very cool and comfortable at that temperature. We’ve been operating on only half of the complete borehole field to date, as Ditch Witch is using part of the field for performance testing. When the testing is complete, we plan to use the full capacity of the field. We are still waiting to see what happens when the system’s been operating longer-term, but we expect that we’ll be seeing about a $50,000 annual savings in operating costs.”

Analyze Data from One Integrated Solution