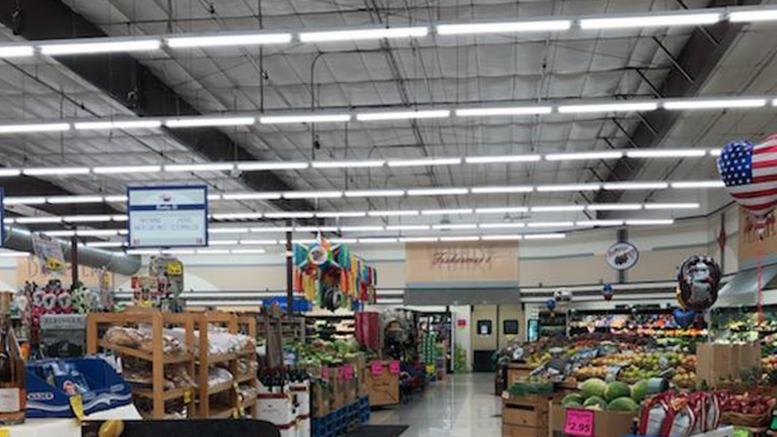 Pioneer Market is a family-owned grocery business operating in Mariposa, Calif., and Waterford, Calif. Its mission is “Providing the Best for Our Community,” and the stores deliver on that by providing quality and cost savings for customers. When it came time to upgrade the stores’ lighting systems, the foremost goal was to improve the customer experience with higher natural light levels.

The high 95+ CRI LED tubes replaced the faded and dull appearance of produce and merchandise with a dramatic improvement in color rendering and contrast (the effect of light and dark areas are equally important and can lead to a 10 percent sales boost in retail).

For lighting control, the physical space of each store was divided into multiple zones consisting of more than 500 luminaires and 250 Bluetooth mesh devices in total per store. The existing lighting luminaires and the grocery aisles ran perpendicular to one another which would usually represent a difficult commissioning application.

Many customers made positive comments after the LED lights, with 159 lumens per watt, were installed about how much better the light levels appeared, and the product colors in the meat, fruits and vegetable departments made the food look much fresher. Store Owner Jason Dubberke says, “The new brighter lighting levels were exactly what I was hoping for when I agreed to do the project”.

Not only did the completed result exceed the intended goal of improving the customer experience, but the combination of LED lighting and advanced networked lighting controls also generated significant energy savings.

Just one example of the potential energy savings with networked lighting controls is how the nighttime lights were controlled. For security reasons, the store lights are never turned off but the configuration capabilities of networked lighting controls allow the store to drastically reduce the light during non-operational hours. The lights were dimmed from 10 p.m. to 5 a.m. from 10W per LED lamp to 3W per LED lamp. This provides a cost savings of approximately $390 per month, or $4,672 per year. The kWh savings is 64 per day and 23,360 per year. In addition, dimming the lights had no detrimental influence on the light quality, which is especially important for stockers and cleaning service at night.