The Gilbert, Ariz., Heritage District is the site where Gilbert was established in the early 1900s. Today, the district is a bustling, pedestrian-friendly area filled with offices, restaurants and boutiques. In 2010, Phoenix-based Upward Projects, a firm that opens unique restaurants that are deeply rooted in their communities, scouted Gilbert for the location of its third Postino wine café.

“When choosing a location and a concept, the community that surrounds the property is the cornerstone to that decision,” explains Lauren Bailey, who is a partner in Upward Projects with her husband, Wyatt, and Craig and Kris DeMarco. “We consider our guests, neighbors and employees our biggest asset; our company culture is based on that.”

Upward Projects engrains its restaurants in their respective communities by retrofitting existing buildings that have historical relevance to the area, sourcing homegrown ingredients for food and supporting local charitable organizations. For example, the firm’s first restaurant, Postino Arcadia, was established in 2001 inside the historic Arcadia, Ariz., post office. The wine café serves Italian food and its name was inspired by its notable space; postino is Italian for postman. Postino Arcadia’s success led to the opening of Postino Central in north central Phoenix in 2009. Postino Central is housed inside a mid-century 1950s building, which had been a neighborhood deli for 30 years. Gilbert’s Heritage District was a logical choice for a Postino location on Phoenix’s east side.

“There is such great energy and a real sense of community in Gilbert’s Heritage District, and we loved the other businesses that were there,” Bailey says. “However, all the really historic buildings were already taken.”

What was left was a 7,000-square-foot territorial-style structure that had been built in 1998 and had hosted several failed restaurants before becoming vacant in 2008. However, Upward Projects was not deterred and contacted the building’s new owner, Michael Bennan of Scottsdale, Ariz.- based Oakmark Properties LLC. “We learned he was as committed as we were to getting it right,” Bailey says. “He wasn’t trying to cut corners or just put a coat of paint on it. He really wanted to invest to make this a place where we would be for a long time.” 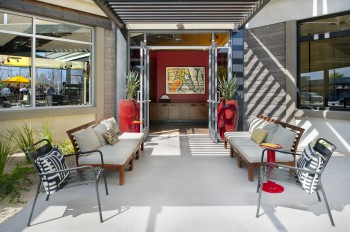 Some folks in Gilbert said the territorial-style building was cursed; others noted its physical appearance didn’t lure customers inside. The 1-story structure had few windows and even fewer embellishments, making the building appear somewhat like a fortress.

To reverse the “curse,” Bennan hired Nelsen Partners in Scottsdale to redesign the building’s exterior. The firm’s goal was to bring the building’s scale down and open its interiors to the outdoors. The open concept fit perfectly with Upward Projects’ goal of making Postino East more intimate while opening it up to the community. “We were accustomed to doing stores that were 2,500 or 3,000 square feet,” Bailey notes. “Our first instincts were to divide the space in two and give it an open-air feeling.”