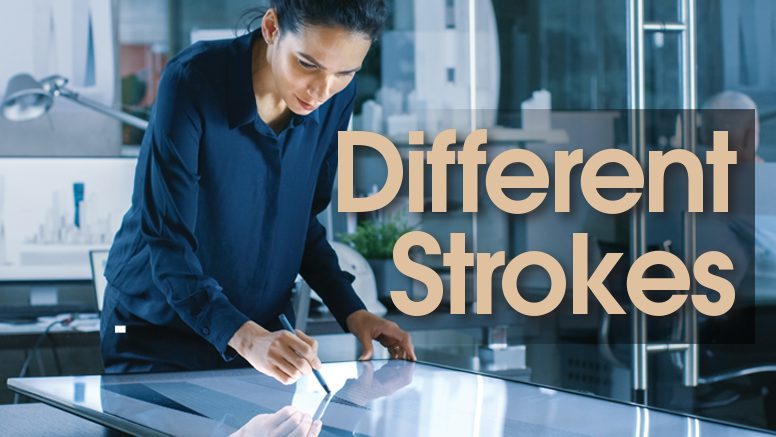 In his 2014 book, Why Architects Still Draw, Paolo Belardi posed a rather poignant question: Why would an architect reach for a pencil when drawing software and AutoCAD are a click away? The question of whether it’s better to do things by hand or rely on automation reveals a kind of tension in architectural circles about the way in which buildings are designed today versus in the past.

With technology advancing at breakneck speed, it seems there’s a renewed interest in drawing and making things by hand, as evidenced in part by the Maker Movement in recent years (see retrofit’s “Trend Alert” in the May-June 2018 issue, page 82). There’s no doubt architects have more tools at their disposal than ever before, but does that mean today’s designs created on a computer are better than those meticulously drawn out on paper? Are old-school methods of drafting and creating physical models inherently more thoughtful than digitally produced ones? Does anyone really care how a building is conceived anymore, or does the end justify the means, so to speak?

A Different Way of Thinking

Belardi’s defense of sketching by hand is less about trading a digital device for a measuring tape, as the book’s publisher notes, but rather that drawing represents a way of thinking that serves as the interface between the idea and the work itself. In other words, he suggests drawing “is not a passive recording but a moment of invention pregnant with creative possibilities.”

Unfortunately, the art of hand drawing is becoming a rarity, and many notable architects (including the late Michael Graves, per his op-ed in The New York Times) believe something has been lost in the translation between analog and digital.

Gillette notes most students enrolled in architecture and design programs have never taken an art or drafting class—a statistic unheard of 25 years ago. As a result, there’s a sense of apprehension among more seasoned professionals about students and young architects who have never learned to draw by hand because they lack an understanding of how buildings are put together, which is revealed in their renderings, according to Thomas W. Hutchinson, AIA, CSI, Fellow-IIBEC, RRC, principal of Hutchinson Design Group Ltd., Barrington, Ill.

“There’s always been a concern with people who learned to draft by hand that—especially in the second or third generation now—people who have never drafted by hand, they just draw randomly or they copy and paste things and don’t understand the implications of what they’re drawing,” Hutchinson says. Because many young professionals have never drawn a two-by-four to scale, for example, they lose a sense of feel for what they’re creating, he explains.

“I do a lot of peer review of architectural drawings and oftentimes they are so lacking in detail. The drawings are just basically scope documents, relying on the manufacturer and/or contractor to work out the details,” Hutchinson adds. “The drawings basically communicate ‘Oh, we want a roof, or we want a wall’—but there’s very little detail or understanding of how it’s constructed. And I think that’s the downside of always using CAD; lines are drawn without knowing what they are and then copied for the next project.”

Gillette says the ease of rendering on the computer requires much less effort to produce a photorealistic rendering of a project than it did just a few years ago. “But slick renderings and fancy computer graphics aren’t everything,” he points out. Rather, there’s something to be said for the architect who can sit down with a client and on the back of a napkin design a house or a complex architectural detail. “It’s beautiful and instant. His clients love to watch the process and see his creativity,” Gillette says
of a local architect who still draws by hand. “No taking sketches back to a computer technician to CAD draft and then turn it into a visualization. It’s right there in front of you.”

Hand sketching certainly offers a sense of immediacy and creativity, but as Andrew Furman, M. Arch, BAA, ARIDO, IDEC, NCIDQ, associate chair and associate professor at Ryerson University’s School of Interior Design, Toronto, points out, the evolution of technology and the profession as a whole have enabled design practitioners to blend the best of both worlds. “I think people have realized that there is so much more that can be done by combining the two, using hand skills and traditional crafts and bringing them back into the fold with all the latest technologies that are out there.”

For example, Furman says even the best 3D-printed models require hours of trimming and cutting by hand to clean them up to perfection—so the hand is still involved in the process even if it may not always be on the front-end of it.

As Technology Overloads Our Environments, Handcrafted Design Has Emerged to Offset It

Be the first to comment on "Hand Sketching Is Experiencing a Resurgence. However, Analog and Digital Are Not Competing but Complementary Tools that Result in Richer Building Designs When Combined."