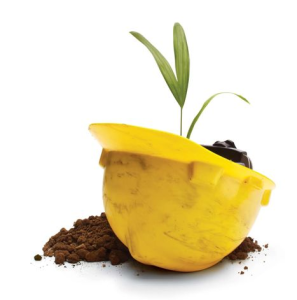 By developing a hard hat sourced from sugar, the firm is effectively reducing the overall carbon footprint associated with the life-cycle of this product. Through the natural process of photosynthesis, sugarcane cultivation captures CO2 from the atmosphere, thereby reducing greenhouse gas emissions. In fact, according to a 2007 eco-efficiency study conducted by Fundacao Espaco Eco, for every ton of green HDPE produced, approximately 2.5 tons of carbon dioxide are captured from the atmosphere and environment.

Green high-density polyethylene is also 100 percent recyclable in the same stream as conventional HDPE, making it suitable for reuse in non-safety products and further enhancing the sustainability benefits of the new hard hat. Like traditional V-Gard hard hats, the new V-Gard GREEN hard hat will be marked with a recycling label to further remind and educate users to recycle their helmet at the end of its use cycle.

In recognition of MSA’s leadership and innovation in head protection, Frost & Sullivan, a global research organization of 1,800 analysts and consultants who monitor more than 300 industries and 250,000 companies worldwide, recently selected the V-Gard GREEN for its 2013 New Product Innovation Leadership Award.