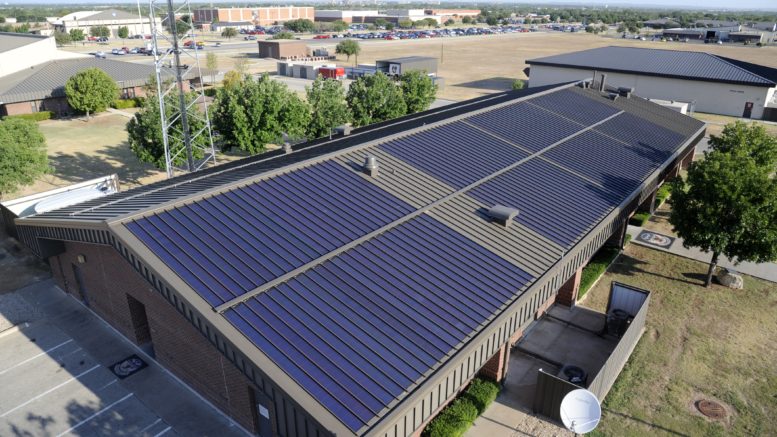 The retrofit metal roof is an integrated system, which affords an architecturally pleasing appearance.

There is growing interest in renewable energy, such as solar, to reduce our dependence on foreign oil and minimize the environmental impact of burning fossil fuels. Sunlight is by far the most abundant renewable-energy resource. A Washington, D.C.-based U.S. Department of Energy report estimated that 352 quads of energy derived from solar power could potentially be economically harnessed. This is only 6.7 percent of the quads of energy available from coal but three times the total energy consumption of the U.S.

A report from London-based Infiniti Research estimates the global solar-panel market will grow at a rate of 5.3 percent during 2011-15. Second quarter 2012 already established this growth pattern by being the second highest quarter ever for photovoltaic installation in the U.S. Further, one of the key factors that will contribute to the anticipated global growth of solar panels is the progression of functional and technological advancements in the whole spectrum of PV products.

The retrofit metal roof is an integrated system, which affords an architecturally pleasing appearance.

For example, the integration of PV with metal roof systems (new and retrofit) is growing. The durability and long service life of metal roofing can outlast the useful life of a typical 25-year warranted PV system. It is common to see a PV system removed and replaced long before the end of a metal roof’s service life. This creates significant savings during the life of the PV/roof combined asset. An additional fact is that PV of any type can be mounted to metal roofing without penetrating the roof “membrane,” which eliminates potential sources of leaks and other maintenance issues. An integrated system also affords an architecturally pleasing appearance with the design line and profile of the metal roof panels.

The U.S. Department of Defense, Washington, is operating with a federal mandate requiring it to produce or procure 25 percent of all energy from renewable sources by 2025. That will require installations of many PV systems across the DoD portfolio of buildings and on federally owned land. More than half the roofs on U.S. military bases currently are metal. The mandate was partially responsible for the DoD’s Environmental Security Technologies Certification Program’s (ESTCP’s) core grant team selecting a retrofit metal roofing demonstration project that includes a building-integrated PV system for Goodfellow Air Force Base, San Angelo, Texas. (For more information about ESTCP, see “Military Snaps to Attention.”)

Be the first to comment on "Harnessing the Sun’s Energy"