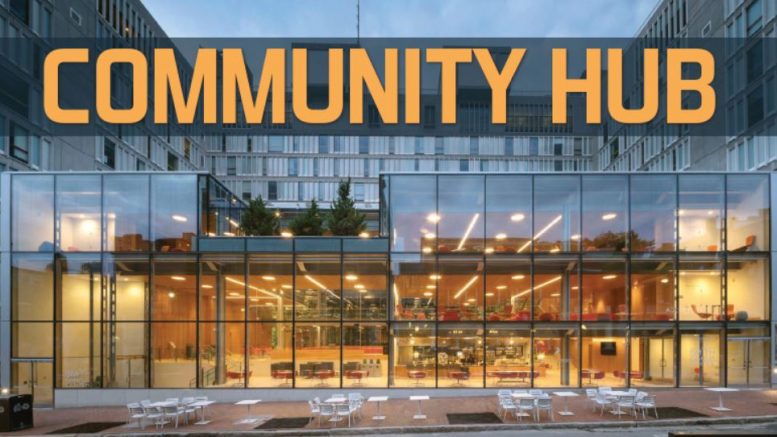 Designed as an administrative building by Josep Lluis Sert, dean of Harvard University’s Graduate School of Design, in 1958, Holyoke Center, a Brutalist building on Harvard Square, was completed in 1966. The 100-foot-tall concrete structure was a remarkable work of urban design for its time, proposing innovative street-level pedestrian space at its base. But as the seminal building approached its half-century mark, it had become unloved and well-worn during the passing years.

In 2013, seeking to realize its first-ever physical hub for students, faculty, staff, visitors and the Cambridge, Mass., community at large, university representatives decided to repurpose the lower floors of the building as the new Richard A. and Susan F. Smith Campus Center. Part of a multi-year effort to create and improve common spaces across Harvard to ensure its physical spaces would foster the intellectual, cultural and social experience, as well as support the wider community, the revived building was envisioned as the new meeting place of “town and gown.”

In April 2016, a large-scale renovation and construction project comprising rejuvenated indoor and outdoor spaces was launched for the Campus Center with a transformational design by Hopkins Architects, London, which worked with our firm, Bruner/Cott Architects, Boston, as executive architect, as well as Arup, Boston; Faithful+Gould, London; Simpson Gumpertz & Heger, Waltham, Mass.; and Michael Van Valkenburgh Associates, Cambridge. Opened in fall 2018, the new building represents a radical reappraisal of the original, bringing bold and inventive new spaces to the heart of Harvard’s campus.

Hopkins Architects’ design reconfigured the building’s first, second and 10th floors, reinterpreting the history and logic of Sert’s architecture through a series of additions to and removals of existing fabric, creating new internal spaces interspersed with captured internal and external landscaping. Understanding Sert’s original intentions for the building and how they had been compromised over the years was crucial to the plan. Harvard and the design team undertook a careful study to fully understand these aims, leading to several key interventions.

The first and second floors of the building, now largely open to public use, were originally realized as a series of physically separated pavilions with little connectivity between them or to the streets around them. Sert placed pavilions on all four sides of the building and to each side of its central arcade to provide frontage and activity onto the surrounding streets and to create new areas of public realm. The pavilions originally connected through from the street to the arcade but had been subdivided and blocked up over time until none of this legibility and connection remained. The existing levels and heights further limited their potential uses. The new plan connects all four quarters of the building into a new whole on the interior while on the perimeter providing visual and physical links to all four streets of the city block.

Each pavilion, along with the spaces that connect them, proffer social and meeting spaces that support multiple activities for the university community—malleable areas that recognize in equal measure a place for the individual and a place for the whole. Two new pavilions were added, and one was refurbished.

The new Moise Y. Safra Welcome Pavilion restores the clarity of the original plaza entrance on Harvard Square. Subsequent additions were removed to create a volume that carefully extends from Sert’s façade in the character of his own pavilions. Proffering a new Harvard “gateway” for visitors and tourists alike, the space also provides information for the whole community on the many events and activities taking place on campus.

An originally proposed central public courtyard subsequently subsumed by retail space was resurrected and reinterpreted as the new Harvard Commons pavilion. A series of internal and external landscape “thresholds” mediate at either end of the arcade leading into this new space, the largest in the building. Set on the footprint of the original courtyard site, it comprises a multi-level, open-plan series of spaces.

At the heart of the Commons is the “living room”, a multipurpose space capable of supporting large-scale events while functioning as a gathering and social area day-to-day. This flexible approach was core to addressing the needs of today’s students, whose learning culture has evolved from a static, classroom-based experience to a much more fluid “whenever, wherever” context. The barriers between social and study space, public and student space are blurred in the Commons, allowing for a flow of activities expressive of openness to a new age of learning.

Through the careful removal of existing concrete fabric, light, view and landscape were also introduced into the Commons, softening the arcade’s singular linearity while allowing its defining order to remain, creating—in Sert’s words—“an oasis in the middle of noisy crossroads.”

The building’s Dunster Street pavilion was refurbished. Its reconnection to the arcade was re-established, and its Sert-designed modernist roofscape of mechanical rooms was transformed into an occupiable landscaped roof terrace.

Additional interventions on the first floor included opening them out across the building’s width and length to form new public connections with the wider urban context of Cambridge and to create views from Holyoke Street across to Dunster Street. The entry floor’s light-filled spaces now feature food venues, unique indoor landscape elements, and comfortable and healthy furniture across numerous spaces for relaxation, studying, informal gathering, programs and events.

The building’s 10th floor was completely reorganized to provide a flexible suite of formal and informal gathering areas that openly engage Sert’s building with the campus, the Charles River and the city beyond.

CIM Is Accepting Applications for Its Executive MBA Program