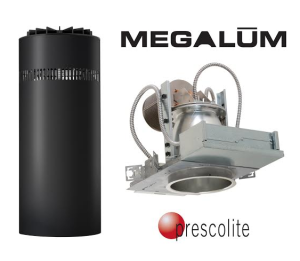 Hubbell Lighting announced that Prescolite’s high-output LED downlight is offered in lumen packages ranging up to more than 16,000 lumens. From school auditoriums and concert halls to theaters and churches, the MegaLum delivers cost savings and performance for high ceiling applications from 20 to 60 feet.

Available in either a downlight (MD8LED) or cylinder (MC10LED) option, the MegaLum is capable of delivering more than 16,000 lumens and up to 100 LPW and offers a variety of dimming options, including DMX. With a rated minimum of 50,000 hours life, the MegaLum ensures lasting maintenance-free operation—a tremendous benefit at very high ceiling heights.

The updated MegaLum also features Prescolite’s Variable Intensity (Vi) Technology. With Vi Technology, customers are no longer limited by standard fixture configurations, but can specify the exact amount of light and power as well as beam distribution to illuminate any environment. The MegaLum can also be dimmed to 10 lumens—surpassing some of the industry’s fixtures that can only dim to 1 percent.

As LED technology penetrates new markets, DMX has become a common control system for today’s auditoriums and theaters. Unfortunately, traditional light sources are unable to receive a digital signal; forcing users to incorporate a dimming rack into the lighting configuration. This not only adds an additional step and cost, but changing the language of the signal creates problematic dimming issues. Some manufacturers have even attached an adapter to the J-Box to convert the voltage, maneuvering around the problem by shifting a step in the process to the fixture. The MegaLum accepts the DMX directly to the driver making it simple to control.

Integrating house lighting with DMX, the MegaLum has consolidated control into one dimming system compatible with a variety of architectural control systems and/or entertainment consoles for new construction and retrofit applications. Uniquely, the MegaLum is factory configurable to deliver any lumen output and drive current desired.

Available in five color temperatures (2700K, 3000K, 3500K, 4000K and 5000K), the MegaLum uses up to 480 individual LEDs specifically mixed to provide a minimum of 80 CRI with 3 SCDM color consistency. The fixture can also be configured to be Hubbell Building Automation wiHUBB compatible.

Area Luminaire Can Be Used in Off-grid Lighting Applications

Outdoor LED Is Available with Integrated Surveillance, Communication and Control

Be the first to comment on "High-output LED Downlight Delivers up to 16,000 Lumens or More for High Ceiling Applications"