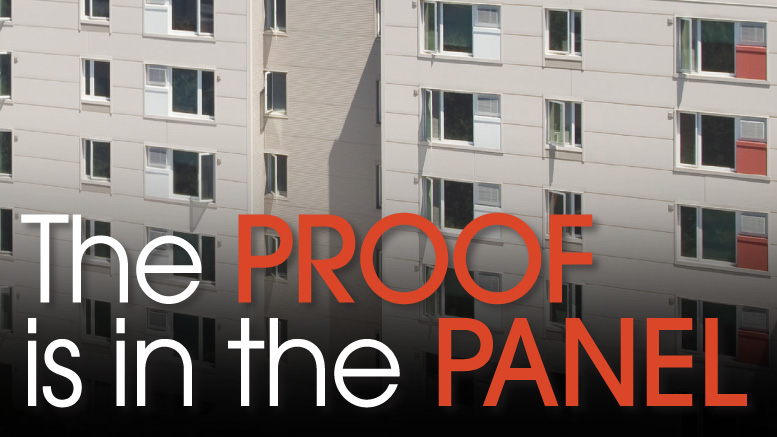 Defining a deep-energy-retrofit (DER) project depends on the scope of work. However, in general terms, improving existing building energy efficiency by 50 percent or more would be considered a success. How that 50 percent is achieved is a more complex topic driven by several factors with energy-cost savings at the top of the list.

During the last three years, I have been engaged in strategy concepts for DERs. It all started with Boston’s Castle Square multifamily housing DER project where I learned about the process of designing and delivering a target Energy Use Intensity of 72 percent below baseline. In conversations with Heather Clark, the visionary project leader, principal of Boston-based Biome Studio, and Bruce Hampton, partner at Elton+Hampton Architects, Roxbury, Mass., I learned an essential element to achieving the EUI in this project was a super insulated envelope. 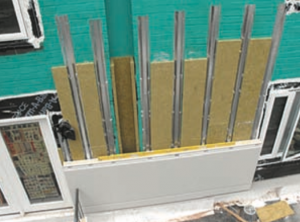 Insulated metal panels (IMPs) were attached to the existing brick facade during the Castle Square DER. Note the mineral wool added in the cavity between the IMPs and existing brick. This system was designed with analysis from a building-science professional. Even with scalable repeatable models, each building will have its own set of unique properties that require building-science analysis and recommended design solutions. PHOTO: Kingspan

The design specified an R-40 envelope for a building built in the ’60’s with no insulation. Recladding the building was a major factor in working toward the aggressive EUI goal. The cladding for this project was a 5-inch R-40 insulated metal panel. There were other energy-saving elements—R-5 windows, a new boiler system connected to hydronic baseboards, internal air sealing between demising walls, energy-efficient lighting and a solar water-heating rooftop system to name a few—but the envelope accounted for more than 30 percent of the target goal. Interest- ing benefits of incorporating an exterior panelized system is that it delivered faster construction time and allowed tenants to stay in the building with minimal disruption. In addition, one year after the recladding was complete, Castle Square was using 58 percent less gas for heat compared to pre-renovation conditions.

[Editor’s Note: To learn more about the Castle Square DER, see our November-December 2012 issue, page 38. Read about the project’s energy-cost savings in our March-April 2014 issue, page 42.]

The Off-Site Construction Council of the National Institute of Building Sciences, Washington, D.C., defines off-site construction as the planning, design, fabrication and assembly of building elements at a location other than their final installed location to support the rapid and efficient construction of a permanent structure.

Insulated metal panels, like those used in the Castle Square project, are just one type of exterior cladding system constructed off site. Exterior Insulation and Finish Systems (EIFS) can be built off site and brought to a job site. Custom steel and prefabricated wood-framed assemblies can be assembled off site to include specified air, moisture, thermal and structural performance functional requirements based on climate zones and relative code requirements. From a design/aesthetic perspective, there are a variety of facade skins that can be applied to these panelized systems, such as aluminum composite material, thin- and full-size brick, and other materials.

These off-site-built panelized systems include material assessment and specifications for specific testing/compliance requirements. Products are also modeled for hygrothermal and thermal performance. Project specifications may include functional performance site mockups and/ or laboratory mockups for validation of the models. Obviously, laboratory models do not accurately represent field conditions but provide data for the building team to make more informed decisions on systems.

Beyond the benefits to the building itself, contractor and real-estate developer M.A. Mortenson Co. found cost and construction-efficiency benefits in panelized systems. For example, in its prefabrication study, Mortenson reported an exterior panelized wall reduced scheduling by 41 days, created indirect savings of $2.4 million and direct cost savings of 3.7 percent, as well as reduced labor by 5,000 hours.

Be the first to comment on "High-performance, Low-carbon, Deep-energy Retrofit Panelized Systems Are the Future for Energy-efficient Buildings"