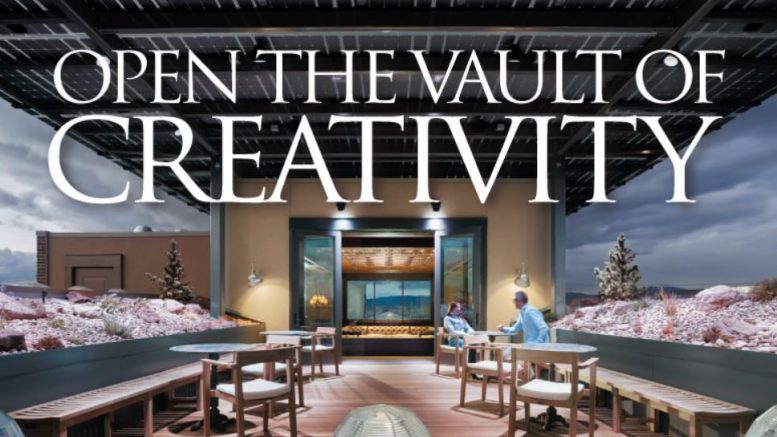 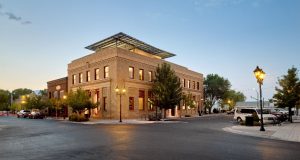 Christopher Bently, the CEO of Bently Enterprises, has a vision for his hometown of Minden, a small farming community in the Carson Valley of Nevada, not far from Lake Tahoe. Bently has taken on the revival of several of the town’s abandoned and underutilized historic structures, enlivening them with new, contemporary uses for his socially and environmentally progressive companies—a property-management firm, sustainable farm and whiskey distillery, among others. “I see no sense in building new structures when we have beautiful historic properties left abandoned,” Bently has said.

When it came time to create his company’s new Minden headquarters, Bently called upon our firm, San Francisco-based Revel Architecture & Design (formerly Nicholsbooth Architects), to reinvent the historic Farmers Bank building as a LEED Platinum workplace. Our approach aimed for a seamless integration of modern technology, sustainable features and new additions, like a new mezzanine, into the building’s historic fabric. We worked alongside a local team dedicated to the building’s preservation and project’s sustainability goals: architect of record J.P. Copoulos and general contractor Miles Construction, both of Carson City, Nev. 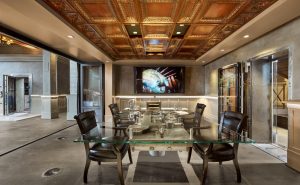 Built in 1918, Farmers Bank is a 2-story, Neoclassical-style building designed by Nevada architect Frederick J. Delongchamps. Commissioned by the locally prominent Dangberg family, early settlers in the Carson Valley, the structure has architectural and historic significance as only the second financial institution established in the area, and it was placed on the National Register of Historic places in 1986. After the foreclosing of its last bank tenant in the late 1980s, this important visual anchor in the Minden commercial district has remained underutilized.

The building had lost its original layout and function long before Bently acquired it, and our team believed any remaining early 20th-century grandeur was too beautiful and important to lose. Bently dreamed of an environmentally sustainable headquarters that respected the dignity of the original banking hall while creating a relevant and inspiring workspace for his company headquarters. He envisioned a space that would welcome the local community and accommodate diverse daily work needs in casual meeting spaces and private offices. In addition, the team’s ultimate goal was LEED Platinum certification.

In all our design decisions, we aimed to merge the building’s remaining historic grandeur with modern sustainability in a cohesive space. We preserved some features in place, like the gold-leaf lobby ceiling, and reused the remaining classic bank elements in creative ways. On the ground floor, a former safe-deposit vault, open to the public, exhibits the history of the building and the story of its transformation. The second vault in the middle of the building was repurposed as a meeting room with the now glass-topped vault door featured as a dramatic conference table. The front half of the building is a double-height space that accommodates office and community gatherings with a large screen for projections and broadcasts. Teller windows were reused in the back half of the downstairs space, delineating private offices from shared spaces.

The heart of daily operations beats upstairs. Here, we designed a combination of private offices, open workspaces and casual meeting areas. Tall cabinets and map drawers from the original bank are reused, and the open staircases feel modern but give a nod to history with custom metal handrails and end returns with classic details. The lamp above the staircase originally hung in the entrance of the farmers bank building from 1918 until 1969, when it “disappeared.” It was later unearthed in Reno, Nev., and turned over to the Douglas County Historical Society, which returned the lamp to its original home for use in the renovation.

On the roof, we expanded a small, cramped room that was originally a lookout into a larger, open penthouse with comfortable furniture; drop-dead views of the Sierra Nevada mountains; and an outdoor terrace comfortably enclosed by sloping, bowl-shaped planting areas. The photovoltaic array on the roof doubles as a shade structure for the penthouse and roof patio. The patio has quickly become a favorite space for employees to work and unwind.