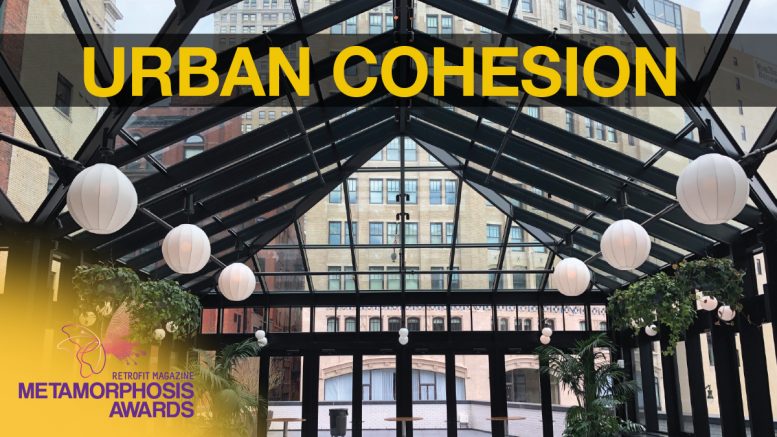 The early 1900s were a bustling time in the city of Detroit. The automobile was king and Detroit was alive with development in the commercial, industrial and manufacturing realms. The 1400 block of Woodward Avenue in downtown Detroit was front and center of this boom. By the 1920s, the Woodward corridor was one of the most active shopping districts in the nation.

As was the story of Detroit, unfortunately, there was boom and there was bust. During the turbulent times of the late 1960s and well into the 1980s, Detroit’s downtown deteriorated into vacancy and blight. As people moved out of the urban core and headed for the suburbs, the core of Detroit withered. The entire downtown was in a state of decline until the 1990s when several prominent developers started taking an interest in grand old vacant buildings and began repurposing them. Further redevelopment was fueled by large civic projects, including the construction of Ford Field and Comerica Park, homes of the Detroit Lions and Tigers, respectively.

One developer responsible for a large portion of the city’s resurgence is Bedrock Detroit, led by Dan Gilbert, who also is CEO of Quicken Loans (now Rocket Cos.). After redeveloping other high-profile vacant structures in the downtown area, Bedrock Detroit’s team turned to the 1400 Block of Woodward Avenue in 2014. At first, the team couldn’t identify a use for the existing buildings but brought in local historic preservation architect Brian Rebain, RA, NCARB, of Kraemer Design Group, to help analyze potential uses. It wasn’t long before representatives of Shinola Detroit, a manufacturer of watches, jewelry and fashion accessories, became interested in creating a boutique hotel experience that aligned with its brand.

BEFORE and AFTER PHOTOS: Kraemer Design Group

The structures on the 1400 block of Woodward Avenue were built in different styles but were typical of urban commercial development of
the 1910s to 1930s. During early analysis of the project site by Bedrock Detroit and Kraemer Design Group, it became clear only two buildings could be transformed into the Shinola Hotel: the 1400 Woodward Avenue Building and Singer Building.

The 1400 Woodward Avenue Building, which was constructed in 1915 for a hardware and household goods company, is 8 stories and is sited at the northeast corner of the intersection of Grand River and Woodward avenues. Its Sullivanesque-style red terra-cotta tiles on its street-facing façades make it one of the most distinctive buildings in downtown Detroit—a perfect front door for the hotel. The Singer Building—at 1416 Woodward—is a 5 1/2-story structure designed by the Detroit architectural firm of Smith, Hinchman & Grylls in 1936 for the Singer Sewing Machine Co.

The 1400 Woodward Avenue and Singer Building would be stitched together with a series of modern infill buildings at 1412 and 1420-1424 Woodward that complement the historic character of the site. On the backside of the block sits the Annex, an extension of the Woodward buildings built over a vacant site that formerly housed one of downtown Detroit’s central steam power plants. At the heart of the project is the Bridge, an urban monument intended to provide an elegant photo-ready moment.

Three other historic buildings on the block (1430-1456 Woodward) were rehabilitated by the developer to activate the adjacent sites around the hotel. Parker’s Alley, a once dilapidated city alleyway on the site, has been transformed into a one-of-a-kind urban experience.

The Shinola Hotel was an incredibly complex project that posed numerous design, programming, engineering and life-safety challenges. The team used several innovative construction and design methodologies to achieve the goals of the project, including high-tech survey equipment; custom expansion-joint assemblies; knowledge of the Michigan Rehabilitation Code; and a clever design trick to mitigate the extreme floor-height differences between the connected historic buildings, which includes the new construction 9-story building at 1412 Woodward.

Perhaps the most difficult initial challenge of a project like this—combining two historic buildings, three new construction buildings, a connector bridge and a central steam exhaust system—is knowing where everything is, exactly, on the site. To make matters more complicated, it’s difficult to get an accurate read on many of these conditions prior to demolition of the existing building fabric.

Once the interiors were completely cleared, scans were taken, and a comprehensive building scan model was then assembled and overlaid with a digital architectural model to check for dimensional clashes. With each guestroom carefully planned to a fraction of an inch, it was critical to identify these types of clashes as early as possible so design adjustments could be made. The model then was used to coordinate the labyrinth of mechanical and plumbing lines snaking throughout the buildings, so final finishes could be made as seamlessly as possible.

Constructing the 20-foot wide, 9-story building between 1400 Woodward and the Singer Building was kind of like threading a needle; when the tolerance between buildings is only inches, knowing exactly how much room there is to work with is critical. It was determined that the gap between the buildings actually varied from floor to floor as much as 3 to 4 inches vertically, indicating the building was not plumb. There are no expansion joint floor covers on the market that accommodate that height of transition. The solution was a custom-engineered floor cover that doubles as an ADA-compliant ramp between the buildings. There were three versions of this floor cover with different widths based on the severity of the height discrepancy. A significant amount of effort was spent detailing each individual location to coordinate the surrounding construction and minimize the aesthetic impact.

“One of the initial challenges we faced was how to connect the existing buildings and the planned new construction. There was as much as 4 feet of difference between the floor to floor heights between the existing buildings,” explains Rebain, the principal in charge of the project at Kraemer Design Group. “In the 1400 building, we had issues with the structure because there was 4 inches of floor slope from front to back, as well as columns that were out of alignment. Overall, we were able to work with the existing structure without serious modification.”

In addition, the retail storefronts of the existing buildings had been modified many times through the years and required replacement to historic standards. When the 1400 Woodward Avenue Building was converted to a jewelry store in the 1950s, the upper-level windows were infilled with block. To bring it back to its early 1900s origins, custom historic-replica windows were installed.

Although no specific green-building certification was pursued, Rebain and his team incorporated many energy-efficiency and sustainable principles as a matter of best practice. For example, heating and cooling are provided by a central plant that feeds all five buildings with hot or chilled water to water-source heat pumps throughout. There are three fresh-air ventilation systems located in different zones around the complex, equipped with energy-recovery ventilators to aid with energy efficiency.

Acoustics between rooms and floors was a concern for the design team. “The buildings are constructed of concrete, which helps with certain sound ranges but not with others,” Rebain explains. The first acoustical treatment actually occurred while leveling floors with a cementitious floor leveler. “In a floor system like this you worry about the sound of heels clicking on the floor,” Rebain notes. “To combat that, we designed the floor system to include 1/2-inch plywood and a 3/8-inch acoustical mat before the flooring was installed.” The design team also specified a custom wall system with a high STC rating for the walls between the rooms and corridors.

Interesting elements of the existing buildings were reincorporated into the new design, including main staircases, an exterior fire escape and painted building signs that were uncovered. “Shinola was interested in incorporating a nod to the industrial past of the city and to the roots of their own company in the design,” Rebain says. “The windows are reminiscent of industrial steel-framed windows, and the black exterior brick on 1420 and 1424 Woodward hints at the character of many industrial buildings nearby.”

The Shinola Hotel is an immersive hospitality experience that includes a 129-room boutique hotel, innovative culinary concepts, curated retail and private event spaces. Construction of the hotel began in late 2015 and was ready for a soft opening in late 2018. The official grand opening occurred in January 2019.

“There’s no playbook for a building like this,” Rebain explains. “Exceptional communication between ownership, the client, architect and construction manager is key. The more complex the building, the more communication is required. Thankfully, our office is within walk- ing distance of this project, so we were able to meet four times a week onsite to address issues as they were identified. Bringing issues to the table early was the key to our success.”

Rebain is gratified by the positive implications this project has made to the area. “For me, the most rewarding aspect is the transformation of the city block,” he says. “When we started with this site, the block was only half occupied and was partially occupied by non-contributing buildings that really needed to go. Being able to bring this block to a cohesive whole is extremely satisfying.”

As part of the continued rebirth of downtown Detroit, the Shinola Hotel project is an exquisite example of building off the design cues of the historic urban fabric while adding a modern twist. The project has become one of the most unique boutique destination hotels in the country and has revitalized a tired area for many generations to come.