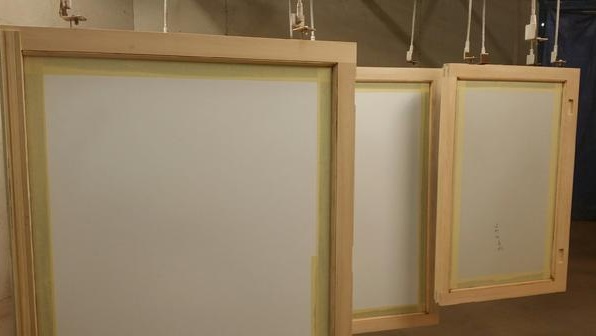 Restoring a window to its original appearance while giving it today’s modern efficiency standards is not an easy endeavor but it is one that is tackled across the country with some frequency. The Minnesota State Capitol, St. Paul, and a former Philadelphia office structure turned luxury residential building are two examples of success in historic window replication.

The Minnesota State Capitol building was completed in 1905 and originally designed by Cass Gilbert, a prominent American architect who also designed the U.S. Supreme Court building. The Capitol’s original wood windows were replaced with aluminum windows 30 years ago and they had exceeded their useful life. Window rehabilitation was part of a huge list of work to be done on the Capitol during a large, multi-stage rehab process that continues today. The project architect had worked with Kansas City, Mo.-based Re-View, a full-service historic window company, in the past and, after a bid process, Re-View was selected to restore the windows to their former glory and then some. 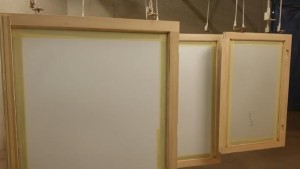 Brooks Gentleman, an owner with ReView, has more than 25 years’ experience in the window industry. “The architects had taken an aluminum window out and we told them the wood frame was probably behind there, although we didn’t know what condition it would be in,” he recalls. Gentleman was correct; the wood frames still existed and were mostly in good condition, except for a few modifications previously made to them when the aluminum frames were installed. Those sections of frame had to be rebuilt.

“A typical window retrofit is pretty simple,” Gentleman says. “We usually want to upgrade the energy performance of a building or we need to replace windows because they’re broken or they let air in.

“In this case, there were a lot of different needs and some of them conflicted,” he continues. “For instance, because they needed to historically match the original windows, you can’t just take a standard window system and put it in there. Profiles and dimensions wouldn’t match. It would alter the look of the building as it was first built. Another goal was energy efficiency. A third element was operable windows.”

“Some windows were 6 by 13 feet and more than 250 pounds,” Gentleman explains. “For operability, we used the weight-balance approach with pulleys because there isn’t another type of balance that can handle that kind of weight.” The Re-View team also had to reinforce the old wood frames with steel plates to provide adequate structural support for the new, heavier windows.

Installation required working around desks inside the building and battling Minneapolis’ notoriously cold winters outside. “A lot of work is temperature-related, such as stripping the frames of lead paint and applying restoration epoxies,” Gentleman explains. “Then we painted frames. All of that has to be done in temperatures 50 F or higher. We draped the external scaffolding and blew in heat. It was -20 F outside and we heated the base level to about 45 or 50 F. Temperatures on the fourth level would rise to about 75 or 80 F.” 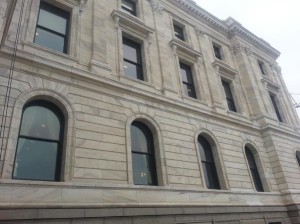 “[The Minnesota State Capitol] took a lot of thinking outside the box to engineer a system that will last 50 to 100 years.” —Brooks Gentleman, owner, Re-View. PHOTO: Re-View

Gentleman explains how the work on the Capitol building put to rest a lot of misconceptions people have about windows. “People would think some of these goals were contradictory,” he says. “They say you can have a historic window but can’t have energy efficiency. Or you can have an insulated, laminated window but can’t open it. Those are tradeoffs you’d typically see in a retrofit project. Standard window systems have limitations. This project took a lot of thinking outside the box to engineer a system that will last 50 to 100 years.”

The Capitol boasts a lot of old woodwork, and the windows’ interior wood had to match the rest of the interior wood. Re-View located 100-plus-year-old logs in Idaho lakes. A century ago, loggers would cut down trees, chain the logs together and float them down the river. During that process, logs would come loose and sink, where they sat for 100 years. Companies today haul the logs up and mill them. That is the wood Gentleman used for the windows’ interior, which he stained to match the existing woodwork.

Quality control was a major part of the project. A third-party independent agency randomly selected about 10 percent of the windows to be tested after installation. The company came to the site, set up test chambers around window openings and used a vacuum that applied pressure similar to the pressure wind-driven rain would create. Once the test pressure is achieved, the company would hit the window with water to see if there were any leaks. The same test method was used to test for air infiltration.

Gentleman explains a typical window would have an air infiltration rating of 0.10. “We were having these windows tested at 0.01, 0.02 and one at 0.04,” he says. “These significantly larger windows had half the rate of air infiltration.”

Insulated glass with low-E coatings reduce solar heat gain and the sash was manufactured from Accoya wood, which is modified through an acetylation process that results in low thermal conductivity and high dimensional stability. “It’s neat how you can take a 100-plus-year-old design and build it in a way that looks like the old window, but with the performance characteristics of a modern-day replacement,” Gentleman adds.

Although restoration of the approximately 300 windows has taken 2 1/2 years, the window retrofit is not complete. ReView will manufacture and install interior bullet-resistant ballistic windows made of steel and ballistic glazing in high-security sections of the facility.

After seeing the restoration, Gentleman recalls Capitol employees describing the windows as “amazing”, “incredible” and saying, “I love these windows.”

“When someone starts using terms like ‘I love’ and having an emotional attachment to a window, that’s what you’re looking for,” he says. “This is a tough crowd, too. They’re politicians! There are protests and bickering and it sometimes seems like a controversial pit. Then, amidst all that, you have all those people coming together and agreeing they love the windows.”

Duct Leakage Found to Be Significant Cause of Energy Waste