The panning system is a frame around the frame of the new window, and can be extruded to incorporate decorative ogee, reverse cove or custom geometry for a historically accurate, exterior appearance. Panning, however, also cuts into daylight opening area, and introduces another sealant joint that can be vulnerable to water infiltration.

If a tear-out of existing frames is the option, perimeter protection is often required in occupied spaces and the process is slowed considerably. Caution must be exercised in determining what concealed wall materials may be disturbed, including asbestos. These cases require the involvement of abatement specialists. With complete tear-out, however, sight lines are reduced for maximum daylight area, new anchors can be more securely attached and seals can be made directly from new window frames to existing wall substrates. In either case, extruded aluminum interior trim is available in many shapes and sizes to finish the opening when replacement is complete.

For the South Bend, Ind., University of Notre Dame campus’ historic Farley Hall renovation, the existing frame was left in place and encapsulated with aluminum interior trim to preserve and restore the campus’ architectural legacy and extend the life of its buildings. For Farley Hall, it was critical to mimic the original windows’ sightlines, wood and putty construction, beveled muntins and beveled exterior face in modern, high-performance glazing systems. 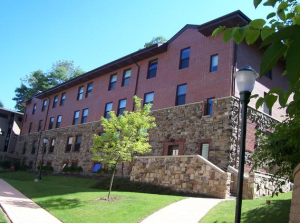 To replicate the university’s desired profiles, digital photos were taken and a 3-D rendering created. These images were transferred into workable shop drawings so the window manufacturer could create the necessary dies and achieve the right contours of the previous woodwork.

Few upgrades can add so much to the performance, comfort and image of an old building than historically influenced replacement of windows. Careful selection of product type and manufacturer, complete and accurate contract documents, and coordination with staff and occupants will result in a successful project.

A muntin is a small framing member appearing to separate two lites of glass. When architectural glass was available only as plate glass (in the 19th century) or sheet glass (in the first half of the 20th century), size was limited, and muntin grids were introduced to facilitate larger glazed area for natural daylighting. With the advent of the float glass process after World War II, available glass size reached 7-feet or more in each dimension, but the aesthetic desirability of the muntin grid’s appearance lives on.

Muntins are available as:

Although TDL grids seem like the most elegant solution, inherent edge-of-glass conductivity issues can significantly increase thermal transmittance and propensity for condensation. It is also important that TDL grids adequately support the edges of IGUs, as excessive deflection under wind load can shorten hermetic seal life, causing internal fogging and necessitating another replacement. For this reason, TDL muntins are usually slightly heavier in sightmline than original muntin bars that supported only single-glazing.

Be the first to comment on "Historically Accurate, Energy-efficient Window Replacement"