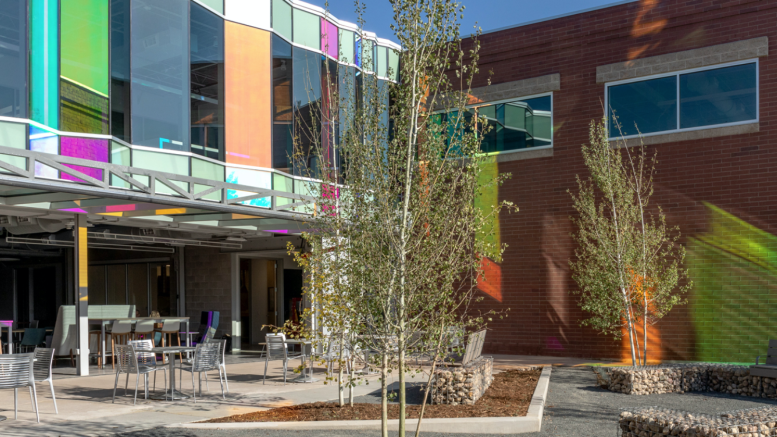 The Prism Plane project by Tres Birds uses a Schweiss hydraulic door to create a beautiful artistic look without high-end cost. The door is clad with curtainwall glass with colored film layered inside the laminated glass. As it’s being looked at, the alternating change in glass color gives off a dynamic effect of color shifts when viewed from different angles, as pedestrians are walking past, or as the sun or weather transforms it.

The curtainwall itself weighed 4,178 pounds, close to the weight of the door it is mounted on. Tres Birds, a full-service architecture and general contracting firm based in Denver, was in charge of the total remodel and recommended a Schweiss hydraulic door. Unlike most architectural firms, Tres Birds simplifies the building process because the company uses its own talented people to do the design work and others in the firm to oversee the construction.

“The area where the hydraulic door went was at an old loading dock,” says Aaron Tweedie, architectural project manager for Tres Birds. “The Schweiss door opened that space up. The door really allowed us to connect it to the inside of the Class A office space building that now opens up to an outdoor whole green area that the owner wanted to create.”

Tweedie says his firm likes doing large custom openings in buildings and has looked to Schweiss Doors before.

“We chose the hydraulic door over a bifold door due to the clear open space at hand that required all the overhead room we needed and we wanted an awning,” Tweedie says. “It gave us more of an awning component outside the building. Specific to this project, we only went with Schweiss. We knew from previous quotes that Schweiss was going to be less costly. It’s a relatively affordable door compared to others.”

“The Schweiss door is kind of the lynchpin in the design connecting to the outside, serving as one big public communal space,” Tweedie says. “We wanted to create outdoor space and we needed to create a central space within the building. Before, the building had four isolated stair cores sort of built in their own little corners that didn’t connect. There was no double-height space connecting them from anywhere.”

He noted that the energy code in Boulder is extremely stringent. Boulder requires projects be 20 percent more energy efficient than the building code would otherwise require. The perception is that rollup-style doors have typical air leakage around them and can’t be used because they are not as efficient. The ability to use a Schweiss door required glazing that had to be NFRC-rated and certified for the glass and entire curtainwall system. Sensors that connect to the building management system require that if the door is open that it automatically adds 10 degrees of difference between cooling and heating whether or not it feels comfortable.

“People just love watching the door work,” Tweedie says. “Those who work in aircraft hangars or whatever are used to seeing big things operate, but the average office worker doesn’t get to push a button and watch thousands of pounds of something move. There’s a lot of pleasure and delight that people get watching the door come up or down. The owners love the door. During the process of the build, there was a moment we really got smiles on their faces when we sent them a video of the door operating. The door came exactly as we ordered it and the welds were great.”

The Gold Label Door company in Denver installed the door. “The install went very well,” says Thomas Myers, commercial project manager from Gold Label. “Jeremy and Brent at Schweiss Doors were extremely helpful with answering any questions we had on this custom-made door.”

Buildings Focus on Energy Efficiency as the U.S. Moves toward a Low-carbon Economy

Danfoss Sponsored and Participated in the Energy Efficiency Global Forum