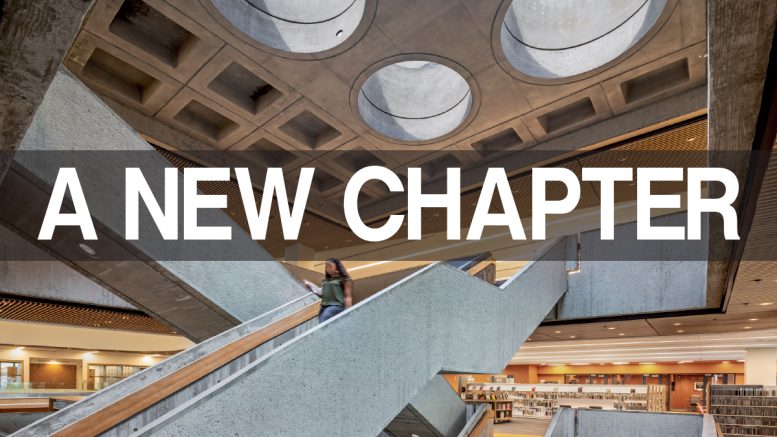 When Atlanta’s Central Library opened in 1980 as an architectural treasure on the site of the former Carnegie Library, city officials, librarians, staff and patrons could not have imagined the advances to come in library science and information gathering. As methods for attaining information have dramatically changed in the last 30-plus years, the library experience has had to evolve to stay relevant and valuable for the community.

Answering calls for a modern library experience that prioritized the facility as a place for the community to meet and connect virtually and in-person, as well as a venue for lending and borrowing, design firm Cooper Carry with associate firm Vines Architecture completed a $44 million renovation of the Central Library in 2021. Moody Nolan served as the architect of record. By featuring iconic design elements while adding in-demand features, such as natural light, group meeting areas and event space, the renovation has brought new life to this storied Atlanta landmark.

Designed by renowned architect Marcel Breuer, known for his Brutalist style, the original design was in itself a response to the need for a revamped library environment.

The building was commissioned by the city of Atlanta to replace the preexisting Carnegie Library. A 1975 bond referendum gave way to the new $19-million structure designed by Breuer and his associate Hamilton Smith. As the last architectural work Breuer completed before his death in 1981, Atlanta Central Library remains an important piece of Atlanta’s cultural fabric, as well as the international design community.

Yet, the passage of time and advent of the digital revolution brought about extreme change. Not only was the building in need of basic functional improvements to maintain operations by today’s standards, but the community’s relationship with the public library had evolved.

Bordered by downtown Atlanta’s dense blocks of office buildings, numerous hotels, and a variety of retail and dining establishments, the library’s façade provided limited windows to reveal its offerings. Inside, much of the 8-story building was underutilized, windowless and difficult to navigate, leaving many of Breuer’s design features undiscovered.

With a drop-off in foot traffic and requests for updated programming, city officials floated the idea of demolishing the building to construct something entirely new, but concerned design advocates opposed the idea and were fortunately successful in the library’s preservation.

Consequently, the Fulton Public Library System and Cooper Carry embarked on a plan to rehabilitate the building into a place that balanced Breuer’s original vision while reimagining the space for Atlanta’s next generation of library users.

To gauge a better understanding of public needs, the Fulton Public Library System held a series of community meetings and business roundtables that invited local stakeholders to voice their suggestions for the library’s future.

From these conversations, several common themes emerged that guided the renovation plan. The first overarching principle was that the library should be what the community needs without a preconceived agenda. Others included but were not limited to:

With this guiding framework in mind, Cooper Carry conceived a design strategy to utilize technology; introduce windows; reallocate space; improve wayfinding; bring mechanical systems up to code; and activate the exterior plaza to create a more comfortable, safe, accessible and functional building from the outside in—all while taking care to honor the integrity of the historically significant design.

Be the first to comment on "Iconic, Marcel Breuer-designed Atlanta Central Library Is Reimagined while Uncovering Breuer’s Design Intention"